Germany Cracks Down With Border Controls: “Papers Please” for Refugees 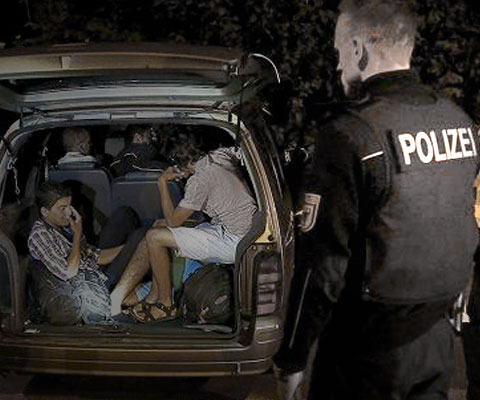 The weight of the Syrian migrant crisis, flooding Europe in recent weeks, has been testing its humanitarian limits.

With more than one million refugees believed to be headed for Germany borders, its leaders are cracking down with strict new border controls that some see as harkening back to a more, well, authoritarian time. AFP reports:

“Can I see your passports, please?” a federal police officer asked, halting the men in their tracks at Freilassing, a key land crossing for travellers between the Salzburg region and the southern German region of Bavaria.

The trio were told to remain on the side of the road to await the police’s decision on their fate.

“We have been walking through Europe for 22 days… We thought that Germany was the only country that would treat us like human beings,” the asylum seeker said.

Unbeknownst to them, they had arrived in German territory just as Berlin announced it was reintroducing border controls after admitting the country could no longer cope with a record inflow of refugees.

Hungary has been caught between the proverbial rock-and-a-hard-place, with so many desperate migrants hitting its cities and attempting to catch trains for Western Europe, that it has been forced to use a police state to control it.

To have a heart or not? Either way, the wave of refugees has been simply overwhelming for the Eastern European nation.

Now, a similar reaction is taking hold in Germany.

While the German government was previously willing to welcome hundreds of thousands of Middle-Eastern refugees with open arms, it seems that even they are buckling under the pressure of the migrant crisis. Over the weekend, Germany reinstated identity checks along their border and cut off railways that led into the country from Austria. Their decision marks a temporary end to the passport-free travel to Germany that is enjoyed by EU citizens.

Their decision arrived a day before EU ministers were supposed to meet and figure out what to do with the thousands of refugees that are already in Europe. The magnitude of the crisis grows by the day, as Germany’s Vice Chancelor reassessed the number of migrants that are heading for their borders. “There are many signs that Germany this year will take in not 800,000 refugees, as forecast by the interior ministry, but one million.”

Germany isn’t alone in their decision to clamp down on their formerly open borders. Austria, Slovakia, and the Netherlands have all instated new border checks, and Denmark has announced that they will no longer accept any more refugees. The Prime Minister of Hungary has even ordered the construction of a 108 mile barbed wire fence along his nation’s border, as well as the criminal prosecution of any illegal immigrants. “Illegal border crossings will no longer be misdemeanors but felonies punishable with prison terms or bans.” One by one, the nations of Europe are locking down their borders in the face of the migrant crisis.

Just as in World War II, the harsh conditions of conflict have displaced huge numbers of people.

Only, this time, media coverage and the perception of war in Syria has been so distorted and so removed from the minds of the average people in America and the Western world, that most have been caught off guard by the “sudden” refugee crisis, without a clue as to why it is happening, and how much blood is on the hands of American and NATO leaders.

At least in WWII, in the days when Casablanca was made, people were in touch with reality enough to know the stakes:

There are no easy answers here. Though there are clearly elements of manipulating this crisis, those refugees truly fleeing a war torn nation under siege can hardly be blamed for seeking a better life. Likewise, the countries of Europe, concerned with the burden of millions of more people coming to their countries, can hardly be blamed for seeking to control the situation and limit their share of the burden.

As many already know, there are several key nations conspicuously close to the crisis which have not accepted responsibility and refused to take in these desperate migrants.

Instead, the sovereignty of Europe, already eroding away under historically unprecedented migration and cultural clashes, will further deteriorate. What would you do in this situation if you were Merkel or other heads of state?

Refugees Dumped on West While Israel, Arabs “Refusing… Because Migrants Fail to Assimilate”