Gaza Clashes: Dozens Killed Before US Embassy Opens In Jerusalem 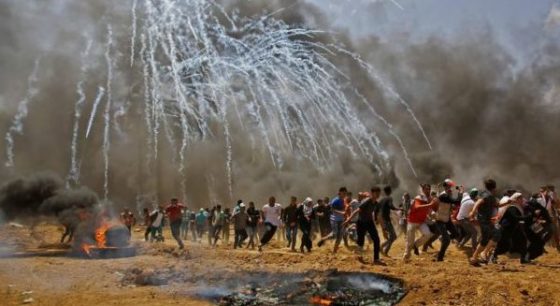 At least 41 Palestinians have died in clashes with Israel ahead of the United States embassy opening in Jerusalem.  Moving the US embassy to Jerusalem has been a controversial decision from the get-go, and the situation is becoming increasingly violent.

Palestinians have seen the opening of a new embassy and declaration of Jerusalem as the Capitol as clear US backing for Israeli rule over the whole city, whose eastern part Palestinians lay claim to. Top US officials, including President Donald Trump’s daughter and her husband, are attending Monday’s event, which the leader of Hamas has said is a war declaration.

Hamas leader Ismail Haniya said in a speech in Gaza City on Thursday that President Donald Trump‘s recognition of Jerusalem as Israel’s capital has “killed” the Israeli-Palestinian peace process. “This decision has killed the peace process, has killed the Oslo [accord], has killed the settlement process,” he said. “The US decision is an aggression, a declaration of war on us, on the best Muslim and Christian shrines in the heart of Palestine, Jerusalem. We should work on launching an intifada in the face of the Zionist enemy,” Haniya said. –SHTFPlan

An “intifada” is an uprising, and it looks as though Haniya was not bluffing, but neither was Donald Trump, as the dedication ceremony is currently underway [at the time of this writing]. “Today we open the United States Embassy in Jerusalem, Israel,” U.S. Ambassador to Israel David Friedman said at the inaugural ceremony, attended by a U.S. delegation from Washington and Israeli leaders.

Hamas, Gaza’s Islamist rulers, have led mass protests in what has been dubbed the “Great March of Return” for the past six weeks and Israel now says demonstrators are trying to breach the border fence.

According to the Hamas-run health ministry, and as reported by the BBC, children were among those killed in clashes on Monday. The health officials also said 900 Palestinians were wounded, about 450 of them by live bullets. Palestinians threw rocks and firebombs, while the Israeli military used snipers as toxic black smoke poured from burning tires.

Israel’s army alleged that 35,000 Palestinians were taking part in “violent riots” along the security fence and that its troops were operating “in accordance with standard procedures.”

Hamas, which is in a state of conflict with the nation of Israel, has said it would step up protests in the lead-up to Tuesday, the official Nakba commemoration. Hamas also says it wants to draw attention to what Palestinians insist is their right to return to ancestral homes in what became Israel following the foundation of the Israeli state on May 14, 1948 – exactly 70 years ago to this day.

“Today is the big day when we will cross the fence and tell Israel and the world we will not accept being occupied forever,” a science teacher in Gaza, Ali, told Reuters news agency.