Franklin Graham: ‘We Are In A Coup D’etat….They Are Using The Media’ 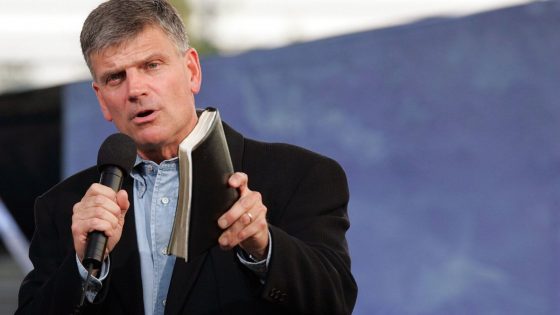 Prominent Christian leader Franklin Graham said he believes the country is already in the throes of a coup d’etat. Graham also said that those attempting to overthrow the government are using the media, not bullets, to achieve their goals.

“I believe we are in a coup d’etat,” Franklin Graham said last week on the Todd Starnes Radio Show. “There are people in this country who are wanting to destroy the president and take over the government by force.” Graham and other Christian conservatives have been targets of the bias and liberal weaponized propaganda we often refer to as “the mainstream media.”

“They are not going to use bullets. They are using the media – to plant thoughts in people’s minds that he’s incompetent, that he’s dangerous, that you can’t trust him with nuclear weapons, that he is mentally unstable,” Graham said.  According to Fox News, many prominent Christians have been accused of hypocrisy for backing a man who is accused of cheating on his wife and using profanity.

“I have a very simple admonition at this point,” Michael Steele said on MSNBC’s Hardball. “Just shut the hell up and don’t ever preach to me about anything ever again. I don’t want to hear it.” Steele, the former head of the Republican National Committee, was furious at evangelicals. “After telling me how to live my life, who to love, what to believe, what not to believe, what to do and what not to do and now you sit back and the prostitutes don’t matter? The grabbing the you-know-what doesn’t matter? The outright behavior and lies don’t matter? Just shut up.”

But Graham isn’t the only person who’s made mention that the deep state is already attempting to remove Donald Trump. Roger Stone listed the steps the deep state will attempt in detail, calling them Plan A, Plan B, and Plan C.

The Deep State’s “Plan A,” is the imploding “investigation” into alleged “Russian collusion” by Special Counsel Robert Mueller, said Stone. If and when that fails, which Stone suggested was likely and soon, the establishment would move to “Plan B.” In essence, Plan B would involve trying to get a majority of Trump’s cabinet to declare him unfit for office. This would allow Trump to be removed under the U.S. Constitution’s 25th Amendment. This scheme is also going to most likely fail, Stone said. Last but not least, though, Stone warned of “Plan C,” which is killing the president.   –SHTFPlan

If Stone is correct, and judging by what’s going on in the realm of politics these days, he very well could be, the deep state is steadfastly working on Plan B as we speak.

Graham also called the accusations against the president unfortunate and distracting. “We are all flawed people,” he told the Todd Starnes Radio Show. “The president is a sinner. Franklin Graham is a sinner. We are not perfect people. Has he had scandals in his life? Sure he has,” Graham said. “These scandals happened a number of years ago. That doesn’t make it right. I don’t condone bad language. I don’t condone adultery.”

But, Graham said he still supports President Trump and he will have a target on his back because of it. “He’s not perfect, but he’s our president,” Graham said. “He said he didn’t do it. I have to take his word over that of the media – that is trying to lynch him.” Graham did not endorse a president during the 2016 presidential election.