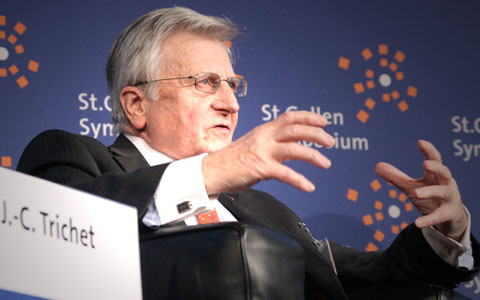 The authoritarian and undemocratic nature of the European Union has once again reared its ugly head.

Former European Central Bank head Jean Claude Trichet – who stepped down in 2011 and is a Bilderberg Steering Committee member and sitting chairman of the European branch of the Trilateral Commission – refused to appear at a hearing after documents revealed his role in giving Ireland a bailout choice it couldn’t refuse:

The four letters, released after four years, revealed the ECB would pull emergency funding for Irish banks unless they accepted the €64billion bailout.

He said: “The threat to cut off liquidity from the Irish banks was in essence a threat to force Ireland out of the Euro.

“The Government was essentially left with no choice in the matter. I believe this threat was a clear breach of the obligations of the ECB to act in the interests of all the citizens that use the Euro, not least those of Ireland.

“Three years ago, Mr Trichet threatened the previous Government and the Irish people and held a loaded gun to their heads.

Even the famed movie don in The Godfather could hardly muscle a deal that big.

Those involved in the investigation are suggesting it is a dirty deal of the highest order in the interests of the dominance of the superstate:

Mr Ross said it proved Ireland was “the weakest country” that was “picked on first” by the powerful bank.

“It was an example of corporate bullying by a Central Bank of a democratically elected Government.”

The European Central Bank took on massive new powers during the post-2008 near-economic apocalypse, demanding new “emergency funds” from member states in the EU to act as a stop gap against defaults in the PIIGS countries – Portugal, Ireland, Italy, Greece and Spain – and others like it.

UKIP leader Nigel Farage outed the European Central Bank (ECB) as a dictatorship for European-wide governance back in 2011 during a floor speech.

Though various high officials are attempting to pressure Mr. Trichet to appear, the elite banking insider has flagrantly indicated his refusal to be held accountable in even a token hearing on the tectonic events of the economic disaster in Europe.

Instead, Trichet claims he is ‘not accountable’ to individual nations in Europe, but solely to the European Parliament – a decidedly undemocratic institution:

Mr Trichet told Bloomberg he had no intention of appearing before a national parliament.

Mr Trichet refused to comment on the release of the letter but referred back to his previous remarks that he was answerable to European parliament not individual national ones.

Trichet is also a former member of the board of directors for the very powerful and very quiet Bank of International Settlements, which some have argued is the ultimate in central banks around the world, as well as numerous other corporations, including the European Aeronautic Defense and Space Company (EADS), now known as Airbus, where he currently sits.

His replacement to the European Central Bank is Mario Draghi, also a Bilderberg attendee.