This article was originally contributed by Lior Gantz of The Wealth Research Group.

The markets have GONE UP, almost in a straight line, since the March 23rd lows. Who’s been doing all the buying? Institutional money has been SELLING into strength, so we know FOR SURE it’s not them. Hedge funds have turned even MORE BEARISH, so it’s absolutely not them. Buybacks from the likes of Apple Inc. are back, so that’s part of it, but is that the only explanation?

Retail investors, the younger demographics, are RUSHING BACK, thinking that every blue-chip company that is down 50% MUST go back to its all-time high, pre-COVID-19.

It’s not only buybacks and retail that are buying, it’s also the FEAR OF FIGHTING the Federal Reserve, which is scaring away investors who want to either SHORT the indices or bet on a slow recovery.

All of this is leading to many investors simply resorting to cash, which means markets are ARTIFICIALLY-HIGH. Without the Federal Reserve, there would be more pressure on the downside and the retail millennials would be out of the picture. 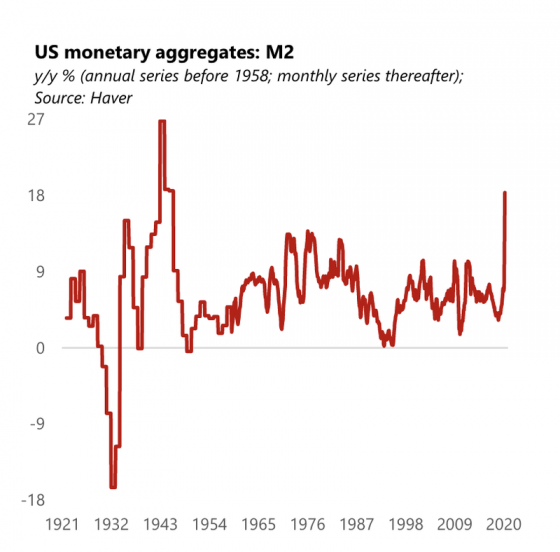 Is there VALUE to be found in current index prices? The answer, as we see it, is that prices are TOO FORWARD-LOOKING.

In other words, in the future, the S&P 500 will trade (in real terms, inflation-adjusted) much higher than the 3,300 it reached before the panic; America’s businesses are the best, no question. But we don’t see that occurring in 2020 or in 2021, and even IF IT DID, the returns it represents are not worth THE RISK.

In the chart above, you can see that Jerome Powell’s actions can ONLY BE MATCHED by the Federal Reserve’s reaction to WW2.

You and I are going through a SURREAL PERIOD on our journey. Covid-19 isn’t the result of IDIOTIC BEHAVIOR by consumers, lenders, Wall Street or CEOs; it is the PRICE PAID for reacting responsibly and maybe too aggressively to the unknowns of the pandemic.

In other words, its impact on the economy is real, but because of the way it happened, we’re seeing BAILOUTS that are justified by authorities as Making People and Businesses Whole.

The problem is that the government DOESN’T HAVE any tax reserves; it’s already operating from a position of weakness. These extensions of goodwill, these helping hands that reach out to us via Helicopter Money and QE programs, are not MAGIC PILLS. They come at a great price.

While many have speculated the price would be runaway inflation, this HAS NOT manifested yet. Still, other UNDESIRABLE OUTCOMES have been introduced to our lives. 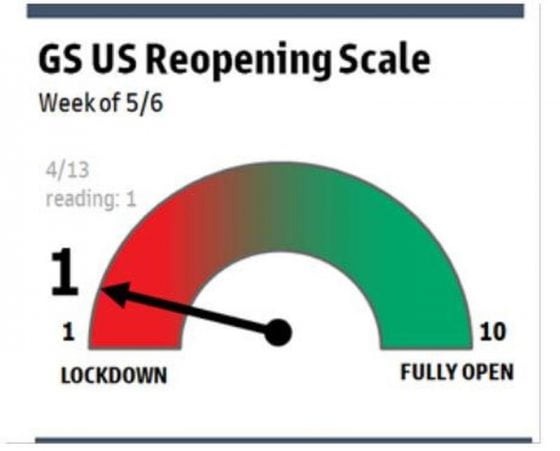 As judged by Goldman Sachs’ re-opening gauge, the reality is that we still DON’T HAVE the slightest idea how fast the world will go back to growth and full economic activity.

We don’t know what the ramifications are of all the stimulus money, Federal Reserve loans, and HATRED towards China.

This is an environment ideal for gold.

We’re passing an IMPORTANT MILESTONE because Quantitative Easing seems to only result in higher asset prices, but not in more productivity.

I expect governments to be PROACTIVE in ways that we’ve not seen since the days of Franklin Delano Roosevelt.

The world has changed; KEEP UP with the pace!