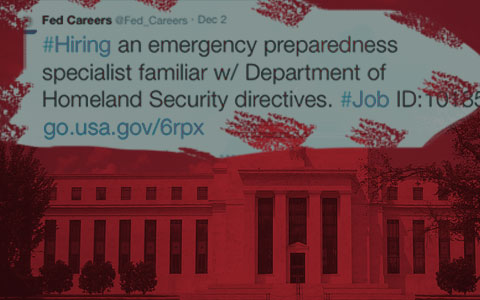 This article was originally published by Paul Joseph Watson via PrisonPlanet.com.

Editor’s Note: What may come in 2015 is not known, but there are numerous signs that the economic powers that be are gearing up for a big event, and taking precautions to cover the physical well being of their employees in the event of an emergency. What do they know that we don’t about what is coming?

The Federal Reserve is set to hire an “emergency preparedness specialist” familiar with “Homeland Security directives” and Hazmat procedures according to a post on the official Fed Careers Twitter account.

The job posting has raised eyebrows because it was made at around the same time that the Treasury Department announced it was set to spend $200,000 dollars on survival kits to be delivered to every major bank in the United States which would include a solar blanket, food bar, water-purification tablets, a dust mask, bandages and medicines amongst numerous other items.

The applicant must also be, “a recognized expert in emergency preparedness and (have) working knowledge of Department of Homeland Security directives” as well as be responsible for the Fed’s “Hazardous Materials Response Team (HMRT) training, equipment, and response program.”

“The individual must be able to maintain a secret clearance,” states the position description, suggesting that part of the work is national security related.

“The only question is why does the Fed – a uniformly safe institution, where economists engage in deep contemplation and decide how much of the US deficit they will monetize – need a person with these qualifications?” asks Zero Hedge.

According to economist Martin Armstrong, the Treasury Department’s purchase of emergency survival kits was part of preparations for a potential “Mad Max” style event, with the man who predicted the 1987 stock market crash labeling the solicitation “a very strange request.”

Could the Fed’s hiring of an emergency preparedness specialist also be a sign that the central bank is anticipating a massive economic calamity in 2015?