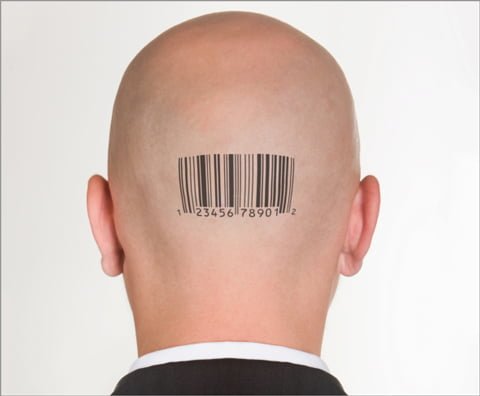 While the FDA says growing your own food is against your best interests, consuming raw milk is dangerous, and alternative medicines need to be controlled by large pharmaceutical companies, subcutaneous passive microchip implants capable of tracking and logging everything from your medical and financial history to your day-to-day movements around the city are perfectly acceptable:

The Food and Drug Administration said that Applied Digital Solutions of Delray Beach, Fla., could market the VeriChip, an implantable computer chip about the size of a grain of rice, for medical purposes.

With the pinch of a syringe, the microchip is inserted under the skin in a procedure that takes less than 20 minutes and leaves no stitches. Silently and invisibly, the dormant chip stores a code that releases patient-specific information when a scanner passes over it.

Think UPC code. The identifier, emblazoned on a food item, brings up its name and price on the cashier’s screen.

The microchips have already been implanted in 1 million pets. But the chip’s possible dual use for tracking people’s movements — as well as speeding delivery of their medical information to emergency rooms — has raised alarm.

We can fully expect the new human tracking chips to be progressively integrated into our society over the next decade. Americans have already implanted the chips into one million of their pets. And what are we as citizens if not pets of the government? As such, we’ll be treated much the same way.

First they’ll start with voluntary programs for those on government sponsored healthcare plans. Membership will have its benefits, and those with the chip will be able to see their doctor quicker than the unchipped. This may even be expanded to include quicker security screenings at airports and other TSA checkpoints.

Then, the Department of Homeland Security will order tens of millions of chips to have on standby in case of a major disaster or emergency. In fact, the Israeli military did just that in October of 2011:

PositiveID Corporation Receives VeriChip Order for Use With Israeli Military

PositiveID Corporation, a developer of medical technologies for diabetes management, clinical diagnostics and bio-threat detection, announced today that it has received an order for its VeriChip™ microchip to be used for disaster preparedness and emergency management in Israel by an integration partner.

The Company’s integration partner intends to provide the microchips to the Israel Defense Forces (IDF), the State of Israel’s military force.

Marc Poulshock, PositiveID’s Vice President of Business Development, said, “We believe there are many important applications for the VeriChip and our associated intellectual property including next-generation identification and bio-sensing capabilities. Our partner is looking to help healthcare organizations, militaries including the IDF, and governments with their disaster preparedness and emergency response needs.”

What that basically means is that in an emergency situation, such as a declaration of martial law, chipping stations will be immediately deployed. It will be for you and your family, and will ensure that you’ll receive emergency rations and other services in the event of a serious catastrophe.

Next, they’ll require all government healthcare recipients to be chipped in order to prevent rampant fraud. An off-shoot may be to implement nationwide chipping programs for those receiving any government benefits including social security, Medicaid, Medicare, and Supplemental Nutritional Assistance.

Prisoners and even detainees will be part of the first adopter groups. What better way to keep tabs on criminals and parolees?

Once the benefits have been visually and linguistically programmed via Walmart shopping counter promotional TV messages and the people have been desensitized to the privacy threat (kind of like cell phone cameras and microphones in every pant pocket or purse in the country), and success stories are touted by mainstream media, we’ll move to full implementation across the entire domestic population of the United States.

School safety and protecting the children is always the easiest first step, thus chip scanning stations will join metal detector security screenings at your local public education institutions. Don’t want to chip you child? No problem! That just means they can’t go to school, which means that you are an abusive parent and Child Protective Services will be coming over for a home wellness visit.

Around the same time we’ll begin to see chip scanning stations deployed (much like TSA checkpoints popping up all over the country today) across public venues that include city urban centers, sporting events and public transportation systems. In fact, you probably won’t be allowed to ride on a public transit vehicle without a chip – because it’s just too dangerous.

Eventually, the chip will need to be implanted into every American. It’s a safety and anti-terrorist thing – you know how it is. We’ve got to do it!

Oh, have you got a problem with all this?

If you’re not doing anything wrong…