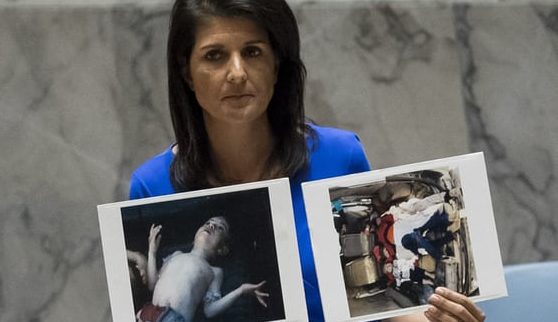 A leaked United Nations report is claiming that the rogue regime of North Korea sent chemical weapons to Syria. According to the report, 40 items used in chemical warfare and ballistic missiles in the war-torn nation of Syria were sent by North Korea.

It is important to recognize first, that this report was leaked. So far, it isn’t clear who let the information get out, but it could be used as a justification for the United States to get itself deep into another war, and therefore, it’s validity should be questioned.

History does repeat itself; if not identically, then in identical circumstances and events in different nations. History also does not just “happen,” as there are powerful forces at work in every nation. False flags have been used throughout human history: politicians and oligarchs initiate them to follow a hidden agenda. Too often the masses become the “True Believer” of Eric Hoffer. Worked up into a patriotic frenzy, they charge into the fray…little understanding that the great war or the great crusade is orchestrated by smiling bankers and nabobs, securely “in the rear with the gear,” sending men out to die to attain their secret objectives.

In this vein, consider that the Military Industrial Complex (MIC) is not limited to American White Anglo-Saxon Protestants of the United States, but a “conglomerate” of independent nations with the ability to wage war, sustain it, and sell arms. Each independent nation has their own “MIC” but they freely exchange goods and services (what we call arms and “negotiated” conflicts). They march to their own beat but allow themselves to be “guided” by the politicians, the oligarchs (who may or may not actively own industries in the MIC), and the bankers. –SHTFPlan

According to The Guardian, the UN panel of experts monitoring sanctions against North Korea said its investigations into Pyongyang’s transfer of prohibited ballistic missile, conventional arms, and dual-use goods found the previously unreported shipments. It said an unnamed UN member state also reported evidence that Myanmar received a range of conventional weapons from North Korea including multiple rocket launchers and surface-to-air missiles in addition to ballistic missile systems. North Korea’s Ryonhap-2 corporation was involved in a 2008 Syrian ballistic missile program, the report said.

The US is not alone in its accusations that Syria used chemical weapons against its own people. The more than 200-page report to the UN security council, which diplomats expect to be made public in mid-March, details “substantial new evidence” about North Korea’s dealings with Syria, dating back to 2008.

Other information coming from yet another unidentified member state claimed that North Korean technicians “continue to operate at chemical weapons and missile facilities at Barzeh, Adra, and Hama”, the report said. It quoted Syria’s reply to the panel about the reports: “There are no [North Korean] technical companies in Syria and the only presence of some [North Korean] individuals are confined in the field of sports under private individual contracts for training athletics and gymnastics.”

SHTFPlan warned of the potential for a false flag, such as this might be, back on February 15:

For all intents and purposes, and directly on the surface, this immediately looks like a false flag. It will be difficult to tell because the only thing we have is the “word” of mainstream media outlets and the United Nations, which should immediately raise all kinds of red flags to the rational human being. It is always important to be critical of information (especially that which they expect you to just believe without evidence or even reading the so-called “report” yourself) that could be used as a justification for yet another war.

Superficial, obvious “reasons” for war are the ones the public swallows, gulping down from the firehose supplied by the ceaseless litany of lies and drivel from the mainstream media. The true reasons can only be found by those willing to not swallow the “crafted narrative.” We must look for the underlying money trails and political agendas of those self-serving leaders…puppet masters who see false flags as tools with State-sponsorship that fulfill their own goals and plans…at the cost (as usual) of We the People. –SHTFPlan

The US government has been looking for a digestible way to go to war with both North Korea and Syria. What a clever and convenient way to wrap this all up in one little UN report. This isn’t to say this IS or IS NOT a false flag, only that it’s important to keep your eyes open and prepare for all possibilities. Never stop asking questions especially when your rights are at stake or global war is possible.