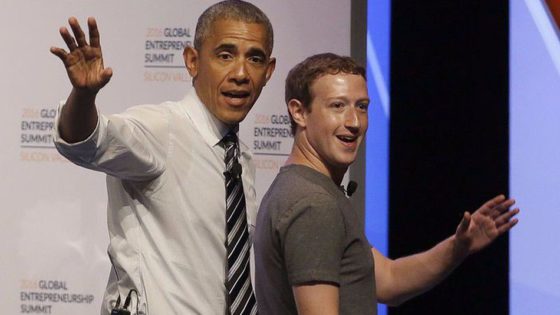 If you’ve ever wondered if the censorship of conservatives and libertarians will ever end, here’s more evidence that it could be just the beginning.  Investigative journalists uncovered the ugly truth that Facebook employees, at senior levels, dozens of former Barack Obama and Hillary Clinton staffers.

Mark Zuckerberg notably failed to mention the recent revelations about the Obama 2012 campaign’s exploitation of the platform’s weak pre-2014 data protections to harvest masses of data from non-consenting users.  But when looking deeper at the number of former Obama staffers and former Hillary staffers in senior positions at the social media giant, it becomes a lot easier to see the “why” behind the obvious and glaring question.

It isn’t a secret that Facebook has been censoring anyone with a non-left political ideology.  Even Diamond and Silk have had a run-in with censorship.

And adding to the free speech violations, the establishment media narrative on the Facebook data scandal hit a decent sized snag last month. The talking heads had hoped that the story would be restricted to Cambridge Analytica, a data analytics firm that they linked to the Cruz and Trump campaigns, and their alleged misuse of user data. But a bigger story soon emerged, linked to a longtime media favorite: Barack Obama. But this story was widely dismissed by the propaganda puppets.

By the admission of Barack Obama’s former media analytics director, Carol Davidsen, the former president hoovered up far more data without users’ consent in 2012, when Facebook’s data policies were (as Facebook now concedes) far more vulnerable to exploitation than they were in 2016.

Mark Zuckerberg admits that, prior to its strengthening of user protections in 2014, Facebook made a critical error in allowing third-party apps to harvest data not just from users who gave them consent, but from their non-consenting friends. What he didn’t mention was the digital campaigning tools developed by Obama for America were among the apps that took advantage of this loophole. –Breitbart

They came to office in the days following election recruiting & were very candid that they allowed us to do things they wouldn’t have allowed someone else to do because they were on our side.

Davidsen also clearly admitted on Twitter that representatives from Facebook visited Obama’s campaign team. Facebook told them they were allowed to get away with it because “they were on their side.”

In total, Breitbart was able to find 45 employees who had previously worked or volunteered with the Hillary campaigns, the Obama campaigns, or the Obama White House and are now employed by Facebook, Facebook-owned companies, or the Chan-Zuckerberg Initiative. This does not include Facebook employees who do not have Linkedin accounts or neglected to mention past experience on their profiles.

Facebook has also denied Carol Davidsen’s claim that the company gave the Obama campaign any special favors in 2012. A Facebook spokeswoman said, “both the Obama and Romney campaigns had access to the same tools, and no campaign received any special treatment from Facebook.”