“Extraordinary” – US Consumer Prices Soar At Fastest In Over 40 Years

Having warned the world to expect “extraordinarily elevated” levels of inflation due to “Putin’s Price Hike”, The White House is likely in shock this morning as headline CPI rose 1.2% in March (vs +1.2% MoM) which sent the headline CPI up a shocking 8.5% YoY (vs +8.4% YoY exp and +7.9% prior) – the highest since 1981. 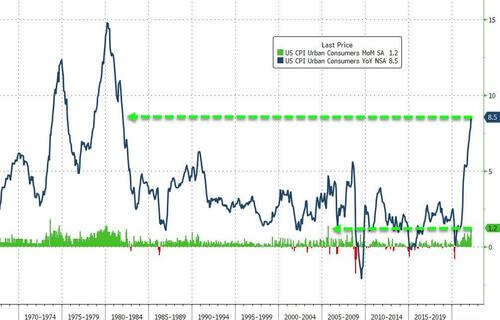 The 1.2% MoM rise is the biggest since Sept 2005 and CPI has risen for 22 straight months, but we note that goods inflation actually fell on a MoM basis (while energy soared)… 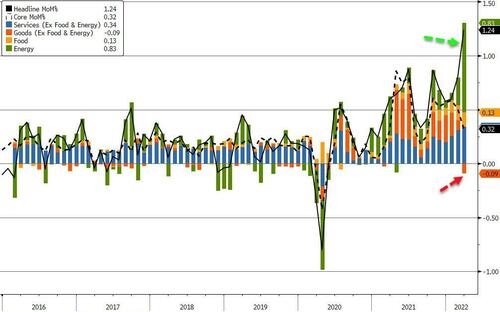 The shelter index was by far the biggest factor in the increase, with a broad set of other indexes also contributing, including those for airline fares, household furnishings and operations, medical care, and motor vehicle insurance.

In contrast, the index for used cars and trucks fell 3.8 percent over the month.

A full breakdown of the top 5 subcomponents in the monthly increase is shown below.

On a year-over-year basis, the rise in prices was dominated by Energy and goods.

Bear in mind that after this March report, inflation expectations start to step down, with second-quarter CPI seen at 7.6% and 5.7% by year-end, according to a Bloomberg survey. According to at least 6 Wall Street banks, this was the peak of the inflation wave.

And finally, and perhaps most importantly for the average American who actually has to pay for ‘stuff’ every day with his (or her or zher) own money, real average hourly earnings fell for the 12th straight month… 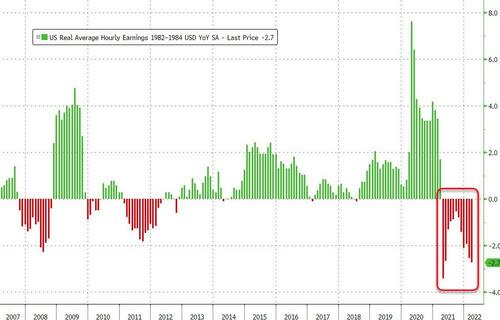 This confirms NBC News’s recent poll that showed 62% of Americans saying their incomes cannot keep up with the rising cost of living.

Still, the good news is, we all know who to blame for this right?

Remember this when they try to blame today’s CPI number on a “Putin price hike”.pic.twitter.com/lNDICLns5y

The bottom line: No inter-meeting or 75bps rate hike as the CPI data isn’t as bad as it could have been.