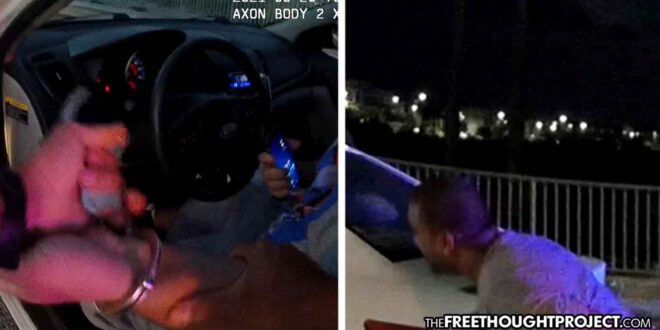 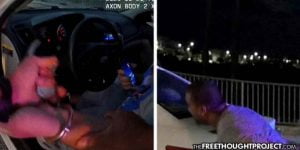 In the land of the free, police will use any excuse, often ridiculous and asinine ones, to pull over citizens to conduct fishing expeditions for contraband or to outright extort them. We’ve seen countless people pulled over for air fresheners, window tint, license plate lights, and even for driving under the speed limit because safety was suspicious. The following case, however, is something we have never seen. A cop pulled over an innocent man because a corner of his still legible license plate was bent.

The Free Thought Project interviewed the victim in this case and his story paints an infuriating picture of all that is wrong with policing in America. The victim, who wishes to remain anonymous out of fear of retaliation, and who we will identify only as JB, was driving home from an oil change last May when his nightmare began.

“I was driving home from getting an oil change on my car,” JB told TFTP. “It was a normal day.”

But that Tuesday back in May of 2021 would stop being normal when a Miami-Dade police officer targeted JB for extortion in his undercover unit.

“I hadn’t done anything wrong and all my papers and license were up to date so I stopped and waited for the officer to come to my door. I had my window down so in no way was I hiding anything or being suspicious.”

As the officer approaches the door, he tells JB that his “license plate is messed up” and “is bent up.”

“I said, ‘okay, let me put my phone on camera to document what’s happening,’ then he just opened my door from the inside, grabbed my hand, and put a cuff on it.”

The entire time, JB is pleading with the officer, asking him why he is doing this and the officer didn’t answer.

Instead, as JB explains, “he just started yanking me to pull me out of the car but I had my seat belt on so he couldn’t pull me out. He then launched himself on top of me inside my car and began to punch, choke, and just physically assault me. All I could do was scream for ‘help! help!’ as loud as I could but no one came and he choked me until I was nearly unconscious.”

All of this can be seen on the video below which is the officer’s body camera footage.

“When he realized that another police officer was on the way, he stopped, got out of my car, and still tried to pull me out. Somehow the seat belt came loose and I was dragged out of my car and put on the floor.” JB said.

JB said they held him on the ground for several minutes, “trying to break my arm,” he explained. As they held him down they searched his car without consent. Nearly a dozen more cops arrived on the scene and stood around laughing as JB lay in agony on the ground — over a bent license plate.

JB said he was injured during the interaction, which is why police couldn’t take him to jail. When they tried to book him, the jail rejected him over his injuries, so they brought him to the hospital.

“I didn’t know what I was arrested for until about 5 hours later after they took me from the hospital to the jail and they gave me papers with my charges,” JB said.

JB tells TFTP that he was charged with resisting arrest without violence, disorderly conduct, and 3 traffic violations. Several months later, all those charges were dropped.

Now, JB says he can’t find an attorney in the city because they are afraid to challenge the police.

“I’m traumatized by this situation and is difficult to find a lawyer to fight for my rights,” JB said.