European Leaders Have Lost the Will to Defend Western Civilization 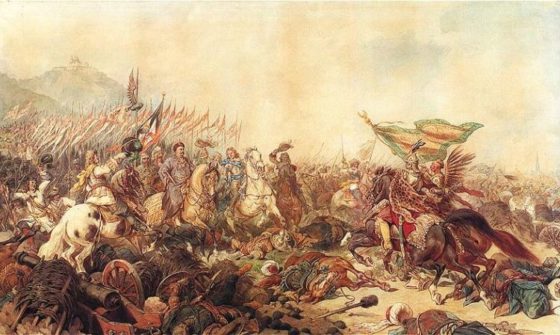 The Western world would have succumbed over 1,000 years ago had its leaders and citizens not made a brave stand in the face of foreign invasion. Today, no less dangerous invaders than those from the past have succeeded where their forebears could not, and without the force of arms.

The history of Western civilization has been interspersed with episodes of military conflict on such a monumental scale that any defeat would have reversed the course of history forever.

Consider the Battle of Tours. Beginning in 711 AD, a Muslim army under the Umayyad caliphate conquered a large swath of what is known today as Spain and Portugal, or the Iberian Peninsula. The tide began to recede only in 732 when the Germanic statesman and military leader, Charles Martel, with a force of some 20,000 men, emerged victorious against Muslim forces on a battlefield in southwestern France in what is known as the Battle of Tours.

Military historian Victor Davis Hanson emphasized the importance of the conflict when he wrote that “most of the 18th and 19th century historians, like [Edward] Gibbon, saw (Tours), as a landmark battle that marked the high tide of the Muslim advance into Europe.”

Martel’s victory represented the first chapter in a protracted effort – known as the Reconquista – a 780-year campaign on the part of the Christian kingdoms to uproot the Moors from the Iberian Peninsula. And it wasn’t until 1492, the year Columbus set sail to discover the New World, that the peninsula was fully controlled by Christian rulers.

It makes for a compelling thought experiment to consider how a powerful historic figure, like Charles Martel, one of the founding figures of the European Middle Ages, would be received by today’s mainstream media, which has a acquired a very particular way of reporting on those modern European leaders – like Hungarian Prime Minister Viktor Orban – who are simply motivated by the desire to strengthen Europe’s borders from illegal aliens. For an answer, one need only consider the breathtakingly biased BBC interview where Hungarian Foreign Minister Peter Szijjártó was told that his government was guided by “xenophobia” in its decision to prevent illegal migrants from entering the country.

Judging by its blood-stained history, however, Hungary has good reason for being concerned about foreign invasion. That’s because the threat of foreign invasion against the European continent did not end in 1492. In fact, overlapping the defeat of the Muslim invaders in Western Europe, a concomitant development was occurring in Eastern Europe with the rise of the Ottoman Empire, which defeated the Byzantine Empire in 1453.

By 1541, the Ottoman Turks had conquered Hungary and at this time were on their way to creating one of the largest empires of all time. After declaring Hungary a vassal state, the Ottoman army marched up the Danube towards the famed ‘Gates of Vienna.’ It was here the Ottomans would meet their match, thanks to the timely intervention of King John Sobieski of Poland.

Upon reaching Vienna on September 12, 1683, with the Ottoman army about to breach the city walls, Sobieski ordered his roughly 75,000 troops to charge at the very heart of the enemy force, which numbered some 350,000. Sobieski’s plan worked and he successfully routed the Ottomans, a momentous event that began the liberation of Eastern Europe from the Turkish yoke.

To understand the significance of the victory, the Pope hailed Sobieski as the “Savior of Vienna and Western European civilization.”

Once again, we must ask: how would the Western media today treat such a historic figure, who led Europe and Western civilization to ultimate triumph against a foreign invader? After all, Sobieski didn’t merely construct a barbed-wire fence against an invading horde as Hungary’s Orban did, and too much outcry and even retribution from his European peers. Sobieski went so far as to put an intruder to the sword.

In a letter to his wife, Queen Marie-Louise, Sobieski described the sheer mayhem and bloodshed that accompanied the battle: “Our Lord and God, Blessed of all ages, has brought unheard victory and glory to our nation. All the guns, the whole camp, untold spoils have fallen into our hands…They left behind a mass of innocent Austrian people, particularly women; but they butchered as many as they could…”

Now of course some will argue that we are talking about apples and oranges here. A marauding army simply cannot be compared to an influx of desperate migrants looking to better their lot in life. However, I would argue that the two groups, while employing radically different methods, nonetheless produce roughly the same results: both groups have a massive impact upon the native population in terms of problems with assimilation, as well as the expenses involved in playing ‘host’ to people from radically different cultures, religions and backgrounds. Most importantly, however, is that in both cases the native population suffers the risk of being completely displaced by the influx of foreigners, especially if the latter is more prolific when it comes to reproducing its numbers.

There is yet another point to consider. As the Hungarian foreign minister emphasized in his interview, much of the migrants who entered Europe arrived by ‘invitation’ of sorts in that they knew the larger European countries, namely Germany, England and France, in tandem with non-profit organizations like George Soros’ Open Society, would provide them with a relatively respectable stipend once they breach the borders of some European country (it should be no surprise that Germany is viewed as the ‘Holy Land’ as far as these economic migrants are concerned). In a report detailing the outlays provided to migrants arriving in Germany, it was reported that “a single adult receives € 408/month on average for everything but rent and health insurance, which the state pays for.” Now if that doesn’t set the conditions for a full-blown exodus into Europe I really don’t know what will. And it has. To date, millions of undocumented migrants have spread out to the four corners of Europe, the consequences of which nobody can predict.

One thing can be said with certainty, however. The great sacrifices of great European men, like John Sobieski and Charles Martel, seem to have been utterly wasted by modern leaders who simply do not have the best interest of their state, not to mention Western civilization, at heart. The site of German Chancellor Angela Merkel snatching the German flag from one of her colleagues during a political assembly, or French President Emmanuel Macron insisting that there is “no such thing as French culture” tells us everything we need to know about these so-called ‘leaders,’ who have betrayed the spirit of European fortitude that allowed Europe to survive and flourish in the first place. Europe should be thankful there are leaders like Hungary’s Viktor Orban or Sebastian Kurz, 31, the new Austrian chancellor who soared to victory by campaigning on stricter border controls in Europe.

Why is common sense in such short supply these days in the Western world?

It cannot be denied that much of Europe’s problems with the migration crisis are the result of it hitching its wagon to the falling star of US foreign policy. However, that does not serve as a reasonable argument for Europe to open its doors to a migrant invasion. If Europe, as well as some of the more notorious NGOs, really want to help migrants from the Middle East, they could start by demanding their governments stop supporting military operations abroad. This is exactly what our modern ‘social justice warriors’ should be demanding, yet they are absolutely silent on the war front. And if they insist on paying these war victims, who are certainly deserving of sympathy, then better to send the humanitarian assistance to those war-torn places instead of inviting hordes to European shores.

As things stand, or fall, Europe’s ultimate survival will come down to brave and courageous men, the Martels and Sobieskis of our times, to thwart any new foreign invasions being delivered to Europe’s doorstep inside the Trojan Horse of ‘good intentions,’ which we all know where ultimately leads.