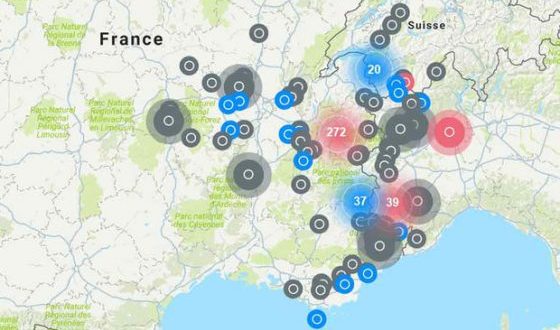 In recent weeks, the locals living in the Maurienne part of Savoie in the French Alps have been getting used to being shaken awake at night. The region has been rocked by 140 earthquakes in a mere 40 days sparking fears that Europe may soon experience “the big one.”

Sismalp, a French earthquake organization, has registered 140 minor tremors in the area in the last month or so. And with the strongest tremor being recorded 3.8 on the Richter scale, many are panicked that Europe’s “big one” could occur soon. While none of the earthquakes have been strong enough to cause any structural damage, they are starting to worry locals. Residents have been briefed about how to act in the case of a powerful tremor.

Martine, a resident of the village of Montgellafray, told a local radio station: “The noise is like a storm coming from far away. Everything shakes. I said ‘that’s it, all the tiles are going to break’. The last earthquake was really frightening. Since the end of August, it has never stopped. Every two days there is one and they are getting more common.”

Other village residents say many are asking questions about the earthquake swarm and the potential large-scale quake in the near future. “Everyone is asking questions. Everyone in the village is talking about it,” Yves, a fellow resident said.

But those living in the region have not had their fears alleviated. Seismologists say they are unable to explain the increase in the number of quakes in the region but have placed five new sensors in the valley to “monitor and better understand the phenomenon”.  Back in 2014 after a series of earthquakes along the French Riviera, a seismologist specializing in the swarms told The Local that south-east France would be hit with a huge quake at some point. The seismologist reportedly said: “We don’t know when a big one will come, but it will and there will be fatalities.”

The past month was wrought with earthquakes swarms, not just in France, but around the globe. California was hit by a swam of 28 earthquakes in the space of 24 hours while Mexico was hit by a massive 8.1 magnitude quake which resulted in the report of over 90 deaths.