Europe Faces Cultural Disaster As Refugees Pour In: “A Direct Threat to Our Civilization” 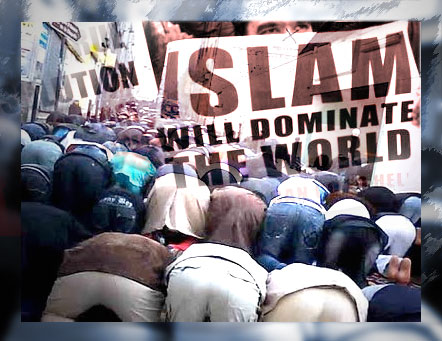 The tide of refugees from Syria and elsewhere has already been disastrous for the people who lived there and now seek another home. But the disaster is just beginning for Western Civilization. Today, the major front is Europe. But it is happening in America, too, and someday it might be too late. A demographic shift is happening so sharply in the UK, France, Germany and other European nations that it could hardly be called anything but a takeover.

The war hawks overplayed the ‘Muslim extremist’ card in the days after 9/11 when terrorism dominated every headline and nearly every political discussion. Hypocrisies devastated innocent lives, wasted money and ran America’s reputation and morale into the ground. But meanwhile, the cultural enemy was being brought home, through waves of immigration.

Zero Hedge warns that Europe is “heading for disaster” with regard to the immigration tidal wave:

“We are heading towards disaster” exclaims UKIP’s Nigel Farage in this brief clip. Having warned for months about both the consequences of actions and the EU’s disastrous policies, the flood of immigrants, Farage warns “we face a direct threat to our civilization if we allow large numbers of people from that war-torn region into Europe.” Simply put, he fears within EU policy “there is no way to filter out extremists in favor of people fleeing in genuine fear of their lives,” and suggest following the Australian policy.

Though there is genuine sentiment for those displaced by a war torn region, the Western authorities have staged a clash with culture at the ideological and cultural level.

There is absolutely no way to keep ISIS or other potentially violent extremists from the rest of the millions of ‘refugees’ leaving the region on legitimate pretexts. The problem threatens the populations of Europe in general, as its overall welcoming policies are tested by the limits of local sentiment in the face of an all out cultural take over.

Critically, this means that the “War on Terrorism” is not just military, but an all out clash of civilizations, as many academics predicted. A cultural battle has been forced, by stirring up war in the middle east, and allowing extremists to flourish, while simultaneously bringing Islam to the West through mass migration of a sort not seen in a century.

The “direct threat” has been steadily growing for more than a decade, as Paris and London take on foreigners who refuse to assimilate, and whose commonly-held beliefs about civil law differ greatly.

This formula is beyond disastrous, and essentially makes violence inevitable. The hypocrisy of foreign policy is hitting hard the fault lines of society, and socially engineering a divided continent that will very likely be mirrored in America if policies do not shift away from war and globalization.

The crisis is truly epic when you realize that many authorities are deliberately trying to “undermine” European nations, and force them to “open up” and adopt more migration and become more subservient to EU rules and order.

Peter Sutherland, head of the United Nation’s Global Forum on Migration and Development, chairman of Goldman Sachs International and Bilderberg attendee, called for just that. The BBC reported in 2012 on Sutherland’s bitter remarks for Europe.

The EU should “do its best to undermine” the “homogeneity” of its member states, the UN’s special representative for migration has said.

Peter Sutherland told peers the future prosperity of many EU states depended on them becoming multicultural.

He told the House of Lords committee migration was a “crucial dynamic for economic growth” in some EU nations “however difficult it may be to explain this to the citizens of those states”.

The deceptive and forceful positions that Sutherland holds in shaping global order are enough to make anyone rethink the narrative of what is going on here in the agenda.

Conflict has been manufactured and injected into society.

Even Art Garfunkel is sounding the warning about the demographic threat to Europe, which stands to come culturally unraveled, by stating some truths that are too politically incorrect to be spoken aloud in Europe. The 60s music icon was interview in the Daily Mail:

Art Garfunkel… of the pop duo Simon & Garfunkel, has highlighted how an influx of Muslims from war-torn countries including Syria could change the nature of Europe for ever.

‘We are at a very interesting stage right now, where people are escaping from horrendous situations all over the world,’ the 73-year-old singer tells me.

‘There was a book I read recently, called Reflections Of The Revolution In Europe, where the author wants you to say: “Look at the shopkeepers, look at the dry cleaners, and it’s all turning Islamic.”

‘He is saying: “Look, I’m not going to make any judgments about this, but I want you Europeans to see that the changing face of Britain, of Germany and all over Europe is happening. It’s becoming much more Muslim. These are the facts.” ’

Caldwell says it’s ‘chilling’ that Europeans can’t have an open debate about the issue because any criticism of Islam is branded Islamophobic. He predicts that Britain is most susceptible to violence and political extremism.

The singer recently completed an epic walk around Europe, so feels he understands… ‘The amount of movement and change is extraordinary,’ says Art, who performs at the Albert Hall tonight. ‘Taking those long walks around Europe, I get down into it — I’m engaged.’

Responding in part to attacks on cartoonists who’ve drawn Muhammad, Dutch politician Geert Wilders warned people in Garland, Texas – one of the states where so much immigration is going – “that high levels of Muslim immigration without assimilation to the Western world—Europe and the United States of America—are dangerous to the culture and values of the West.”

“Take a walk down the street and see where this is going,” Wilders, referring to growing Muslim immigration into his country, previously said. “You no longer feel like you are living in your own country. There is a battle going on and we have to defend ourselves. Before you know it there will be more mosques than churches!”

Immigrants from the Middle East are currently the fastest growing immigration demographic coming into the U.S., a recent report from the Center for Immigration Studies shows.

America in just three years imported more immigrants from the Middle East than from Mexico and Central America combined.

Wow, it is really happening in America, right before our eyes.