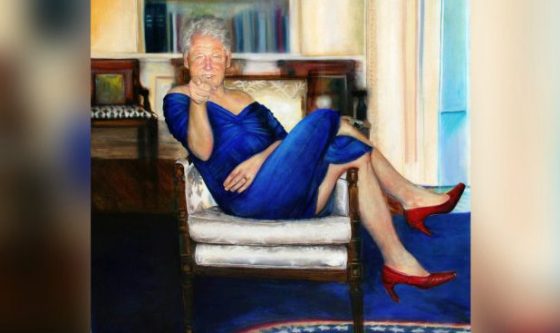 “It was hanging up there prominently — as soon as you walked in — in a room to the right,” a source told The New York Post. “Everybody who saw it laughed and smirked.” Was the blue dress symbolic of the Monica Lewinsky era? It sure looks like it, and we were not the only ones who immediately noticed.

The oil painting of Clinton was dubbed “Parsing Bill,” and was painted and sold by a New York-based artist named Petrina Ryan-Kleid. Saatchi Art, an online art gallery, describes it as an “oil on canvas” with dimensions of 40 W x 40 H x 2 in. The painting inside Epstein’s home appears to be the same size, and sources told The Post it was also done with oil.

According to The Washington Examiner, Epstein’s opulent $56 million Manhattan home on East 71st Street off Central Park was reportedly filled with other strange decorations, including a mannequin in a wedding dress suspended from the ceiling. Epstein’s uniquely bizarre artistic tastes also carried over into his architectural projects, such as the mysterious domed temple-like structure on his private island in the Caribbean. The FBI raided his so-called “Pedophile Island” on Monday.

Clinton has flown on Epstein’s “Lolita Express” numerous times, although he alleges he’s flown less than the records actually show.

The hashtag #bluedress has since gained traction on the social media site, Twitter. As Clinton’s team works hard to scrub to his connections to Epstein, more continue to surface, such as this bizarre painting.

As RT put it so eloquently, the internet’s unofficial Ministry of Truth has been hard at work trying to memory-hole links between former US President Bill Clinton and financier Jeffrey Epstein, who was recently arrested and charged with sex trafficking. The Ministry of Truth was the agency written about in George Orwell’s 1984, which decided what history was and what the public believed. –SHTFPlan