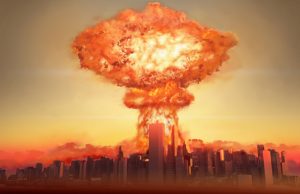 The threats of nuclear war, electromagnetic pulse, or cyber attacks on the grid have never been higher. So what should we be preparing for? In short, all of it.

In all of those instances, the grid is likely to go down, meaning your home will have no power. Your water won’t work, neither will your toilets and your stove or heater (unless you have a wood-burning stove.) So prepare to have no power/electricity for an extended amount of time.

Ruling Class Talks Of Nukes: Won’t “Rule Out” A Nuclear Attack On Russia

Any of these could happen and if they do, continue to use discernment.  The threat of these being a false flag to get the United States into a war is very real. Most Americans are over the warmongering of this country and the death and destruction being spread by the government and are going to be unwilling to suffer the consequences of war. However, a false flag could rapidly change minds.

This will also provide the perfect excuse to force a central bank digital currency (full slavery) on the public. We all know by now we were born slaves, but if you accept their digital currency, it will be permanent and there will be no chance for escape. The end game is complete control over every human being on this planet. They need to control everything from the resources to the grid, to the money supply in order to make this their reality.

The only thing that will help humanity at this point, is to stop being slaves. Stop acting like slaves, and stop acquiescing and obeying their every command. Freedom begins first by realizing you’re a slave, but that you do not have to be!

“It never hurts to have the ideas of self-ownership and non-aggression put into these situations. Because a lot of people there are upset with the current authoritarian regime, and the current agenda of those in power, but they’ve never really thought it through to realize that as long as there is a throne there, this sort of thing is gonna happen. The problem is not the clown on the throne…he isn’t actually the problem and if he wasn’t there, some other psycho would be there. Which is why the crappy idea of statism is what has to go.” -Larken Rose

Waking up is hard, but staying asleep is no longer an option. If anything as far as a nuke, EMP, or cyber-attack happens, use your discernment, while understanding the end game. That’s the best we can do for now, until more humans start to wake up to reality.