Duped By the Political Spectrum

We often hear arguments from the left accusing the right-wing of fascism, while the right accuses the left-wing of socialism of communism. Most people in America would identify themselves as being in the middle, neither too far or left, or too far right. This is the political spectrum most of us were taught in both, public and private school and is demonstrated in the graphic below:

With a left, right, center political paradigm, it is easy to see how one group of individuals can be manipulated into arguing against the policies of, or outright hating, the other opposing group.

As we approach the far left or far right of the traditional political spectrum model, it quickly becomes apparent that the forms of government, while they have many differences, are essentially the same – government run dictatorships. Politics of fear are used to threaten the citizenry with the extremes of each side of the spectrum, and thus most people, who believe they have no other options remaining, end up somewhere in the center.

The above political spectrum, however, does not adequately address the different forms of government and governance. It is merely a depiction of the so-called two-party system, or two-headed snake.

As you may have noticed, the libertarian and anarchist systems of governance are not depicted in the above graphic, because there is simply no room for this mode of thought in our current two-party paradigm. These concepts are outliers that actually have no place within the traditional spectrum.

While it may not provide the perfect interpretation of a true political spectrum, the following graphic may provide a much better view of the different forms of government, which, in our opinion are more important to understand than the different ideologies with a specific form of governance. The right/left political ideologies may be quite different on the surface, but their places within the spectrum of governance fall within the same grouping of government intervention: 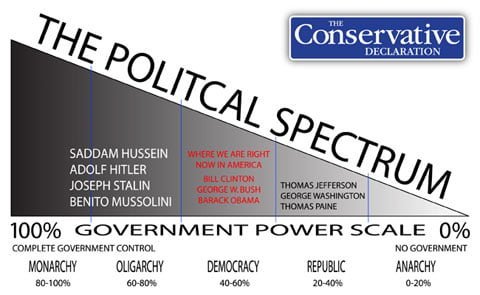 It is clear in the above depiction that if this spectrum where used to demonstrate the different levels of government, as opposed to the traditional spectrum which demonstrate only the different ideologies within one type of system of governance, that the two-headed snake system would likely not be as popular as it is today.

Our problem in America is one of education. Our public education system, and to some extent our private education systems, are heavily influenced by the two-party system, and thus it makes sense that the only option provided to the people from a very young age is one of democrat , republican, or centrist. The traditional political spectrum model has been taught for generations and has subsequently become the accepted paradigm of governance in our country.

In order for us to move out of the current paradigm, a shift is required in the public’s awareness. Expecting government subsidized educators to be on the forefront of this shift is not a reasonable approach, thus it must start on the individual level. We as individuals, it seems, must take responsibility into our own hands and educate ourselves, and then pass this information on to our children, family and friends.

It will take a revolution……of the mind.

Hat Tip The Nothing Store