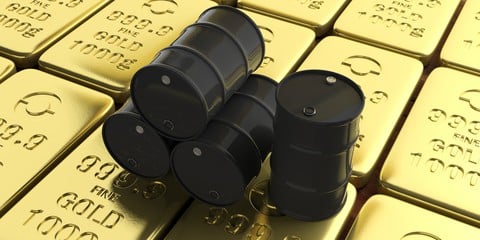 Historically speaking, when oil and gold trade in the way they are currently, it signals “doom” for the markets or an impending recession. Oil prices are hovering around bear-market levels amid concerns over slowing global growth and the potential for tariffs to sap energy demand, while gold has been heading in the other direction.

According to Market Watch, this combination of rising gold and falling crude prices is rare. However, when it has occurred, it has delivered some horrific consequences for the broader market over the coming years. As you can see by this illustration, this is a historical “doom” signal: 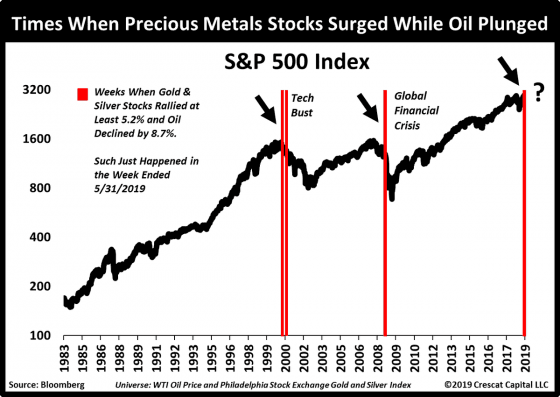 “Buckle up, folks!” said Crescat Capital’s Tavi Costa, who provided the above chart via a Twitter post:

Only three other times in history precious metals surged while oil plunged!

All of them happened during severe bear markets and recessions.

Costa explained to Market Watch that the current macro setup looks a lot like the beginning of the selloff in the fourth quarter of 2018. “Gold-to-oil ratio surging, copper prices getting annihilated, corporate spreads widening, and credit markets screaming recession ahead,” he said. “The Fed’s utterly dovish comments just add to this list. Rate-cuts when late in the business cycle have never been a bullish sign. It reaffirms the many bearish macro signals we have been pointing out. Economic conditions are weakening in the face of asset bubbles everywhere.”

Chief Investment Officer of Crescat Capital, Kevin Smith, who oversees $48 million, is confident the chips will start falling in his direction relatively soon. The latest action in oil and gold isn’t hurting.“The stock market is susceptible to bouts of bullish sentiment,” he recently told Market Watch. “There is a speculative force typical of late-cycle markets that is willing to shrug off deteriorating economic data and a dashed trade deal with China. Too many want to drive that momentum train just a little bit longer. They are not deterred by arguments of excessive valuations.”

These warnings from Crescat Capital come as the markets made big gains yesterday.

If you’ve already got some gold, great! If not, it’s never too late to learn about it!