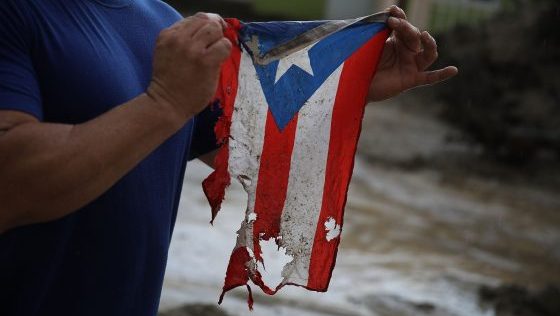 Nearly four weeks after Hurricane Maria devastated the island of Puerto Rico, doctors are experiencing “post-apocalyptic” conditions. The reality doctors in Puerto Rico are facing is similar to that from a dystopian novel.

Doctors are conducting surgical procedures in sweltering 95-degree heat, experience malfunctioning X-ray machines, and have seen medications literally melting. “We’re practicing disaster medicine in real life,” said Dr. William Kotler, a senior resident in emergency medicine at Florida Hospital in Orlando, who spent two weeks volunteering on the island earlier this month. “We improvise if we have to, with very little resources.”

Arriving one week after Hurricane Maria made landfall, Dr. Kotler and four other emergency physicians from Florida Hospital in Orlando, finished up a volunteer mission on the devastated island. They were the first medical relief team the hospital sent to the island. “We went in blind,” said Dr. Julian Trivino, who was among the first team of volunteers.

A second team arrived on October 8th and will stay for two weeks to assist those who need medical attention. When the physicians arrived in the town of Aguadilla on the northwestern tip of the island, the local hospital was in bad shape. The hurricane had almost completely taken down the entire electrical grid and knocked out communications. “I got there and immediately had a patient with serious head injuries from a car accident,” said Trivino, who is the chief resident in emergency medicine.

Access to electricity was so poor that Trivino couldn’t conduct a CT scan, but he was able to do an X-ray. To review the films, he had to go outside and hold the films up to the sunlight to see anything. Afterward, he used one of the team’s two satellite phones to arrange for the patient to go to a trauma center. 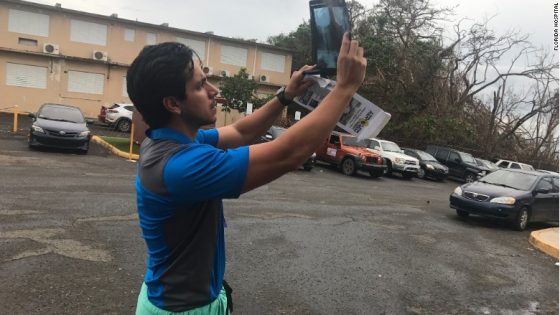 Dr. Trivino must use sunlight to examine x-rays since electricity is sporadic in Puerto Rico.

The physicians are also becoming increasingly concerned that Puerto Rico could be headed toward a full-blown health crisis. “Trauma centers are overwhelmed. Basic surgeries are being postponed. I’ve seen people lose digits because they couldn’t be treated in time,” said Kotler.

And the heat is making conditions even more extreme. At a hospital in Carolina on the northeastern coast, Kotler and Trivino had to perform an emergency surgery; attaching a temporary pacemaker to a patient whose heart rate was abnormally slow. “It was 95 degrees in this ER room. She was sweating profusely and vomiting,” said Kotler. “I held her hand and stroked her head. It’s what I could do to comfort her.”

But there were also several patients who suffered the ultimate fate. In Aguadilla, it was a 42-year-old man in cardiac arrest. “He had a fever of 107 degrees. It was burning hot in the hospital. We scrambled to find ice packs to cool him down,” said Kotler. Nonetheless, he died the next day. “If you have a major heart attack in Puerto Rico, right now, the odds are stacked against you,” said Trivino.

It isn’t just the sweltering heat that’s causing a post-apocalyptic medical crisis either. A lack of clean drinking water is compounding the problems. In one town, the medical team encountered an orphanage where children were on the verge of dehydration. The physicians flew in pallets of fresh drinking water to save the kids’ lives. Because of the lack of water,  Dr. Raul Hernandez, an internist based in San Juan, is bracing for an outbreak and possibly several deaths from waterborne diseases. He said Leptospirosis, a bacterial disease spread through the urine of infected animals such as rodents, is becoming a growing concern. Due to a lack of safe drinking water, people are drinking from whatever water sources they can find just to survive, he said. If that water contains urine from an infected rat, the disease will spread, he said. So far, at least two deaths have been attributed to Leptospirosis in Puerto Rico.

Dr. Miguel Acevedo led the second team of emergency physicians from Florida Hospital. “They say it could take six to nine months for power to be restored fully in Puerto Rico. No hospital can plan to survive on generators for that long,” he said. What doctors are dealing with in Puerto Rico is a “Mad Max kind of situation,” said Acevedo. “The reality here is post-apocalyptic,” he said. “You can’t understand the seriousness of it unless you see it.”