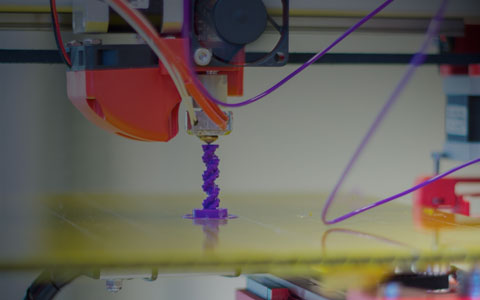 “Reducing barriers to arms manufacturing” is just one of the consequences playing out from the adoption of revolutionary 3D printers. The price of printers has come down from half a million dollars to less than $10k, and the expiration of several key patents is making much more possible.

It has the power to decentralize production and, powered by robotic factory work, forever alter the economics of manufacturing.

3D printing may even have the power to undermine the reach of defense contractors, who build weapons, tanks, planes and more that reach American troops, and through foreign aid and weapons transfers, foreign military forces – friend and foe alike – around the world as well.

Already, a true next-gen entrepreneur named Cody Wilson has caused a stir with his plastic 3D printed gun known as the “Liberator.” The blueprint for this legal, lethal do-it-yourself weapon was downloaded over 100,000 times and can be built from any location with a consumer-grade 3D printer.

It became something of a philosophical threat to the establishment. Homeland Security, the FBI, the ATF, the Joint Regional Intelligence Center and others took notice. News outlets like ABC News highlighted it as a threat to security, labeling the ‘invisible, nearly untraceable’ weapon an “assassin’s dream”:

Inventor Cody Wilson, on the otherhand, identified it as a political act of resistance against the collectivist system:

“That’s a real political act, giving you a magazine, telling you that it will never be taken away. … That’s real politics. That’s radical equality. That’s what I believe in. … I’m just resisting. What am I resisting? I don’t know, the collectivization of manufacture? The institutionalization of the human psyche? I’m not sure. But I can tell you one thing: this is a symbol of reversibility. They can never eradicate the gun from the earth.”

Today, it is not just individual weapons, but the larger system that has has experts and analysts paying attention. 3D printing stands to shake up the status quo for defense contractors, distant military outposts and asymmetrical warfare including from so-called “terrorist” groups:

This could lead militaries to cut out private defence companies altogether. And by combining 3D printing with assembly line robotics, those that remain will be enormously streamlined.

Being able to take printers to a warzone promises a radical shake-up of combat and the defence industry, says Peter W Singer, an expert in future warfare at the New America Foundation.

That sort of disruption carries huge political implications in places like the United States where defence firms are purposefully spread around the country and support millions of jobs.

“Defence contractors want to sell you an item but also want to own the supply chain for 50 years,” he says.

Consider a conflict zone like Afghanistan, where the effectiveness of soldiers is constantly undermined by rough terrain, difficult supply chains and the cooperation of local tribe leaders.

Plans for manufacturing goods, textiles, weapons and even food can be downloaded and enable production anywhere that printers and raw materials are available.

“But now you’ll have soldiers in an austere outpost in somewhere like Afghanistan who can pull down the software for a spare part, tweak the design and print it out.”

For better or worse, those inside the Heart of Darkness aren’t as cut off any longer when it comes to the materials that could make or break military campaigns. That could empower small bands of resistance fighters, too, including those branded as terrorists.

“Think of master bombmakers in the Middle East making new designs that look like everyday products or a lone wolf operator printing a plastic gun he can get past security at the White House,” says Chausovsky.

Again, 3D printing is a double-edged sword with effects for better and probably also for worse. Morally neutral technology that is proving more and more likely to disrupt the established norms.

It may also have enormous impact on the the effectiveness of sanctions as alternate means to war-without-war.

As it stands today, countries like Russia or Iran, who are perceived to be rogue, hostile or heavy-handed on the international stage can be weakened or controlled through economic pressure on imports and exports – much as siege in war cuts of supplies and forces capitulation. But that, too, may change:

“The US has sanctioned everything from fighter jet spare parts to oil equipment. 3D printing could turn sanctions — which have been a crucial part of foreign policy for a generation or more — into an antiquated notion,” says Singer.

• “selective laser syntering” used in the precise printing of metals such as aluminium, copper and steel, expired in 2014

All this makes human labor cheaper than ever, too, with the possible impacts on the economy far reaching and perhaps crippling. Yet, the freedom to create components and parts, and eliminating the need to source and ship them, could also unleash new modes of productivity.

How will 3D printing change your life? Will it empower an independent and sovereign lifestyle, or doom the masses to poverty in a collapsed system run by robots and computers?

It all just depends…