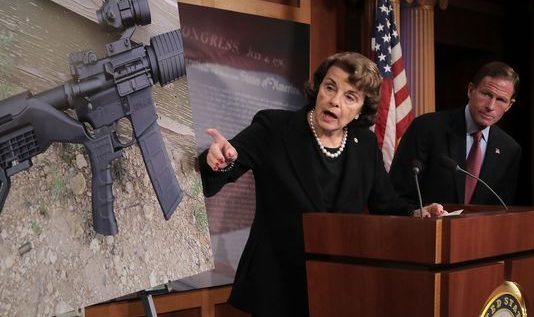 California Senator Dianne Feinstein is getting some Republicans to show interest in her gun bill, which could signal quick gun control in the aftermath of the Las Vegas shooting. Although it is claimed that it is newly crafted, the Senate Judiciary Committee’s top-ranking Democrat has already offered the bill.

Of course, gun rights activists think Feinstein has several gun control bills lying around, and after a tragedy, she simply dusts one off to exploit. The narrowly written Democratic gun-control bill would ban “bump stock” rifle attachments that enable rapid firing.

“You never let a serious crisis to go to waste,” said Barack Obama’s advisor in 2008.

Since then, we’ve seen many Democrats attempt to destroy gun rights in the aftermath of atrocities. But Democrats say that the bill offered by Senator Feinstein, responds to the revelations that some of the weapons that alleged Las Vegas shooter Stephen Paddock used to commit the worst mass shooting in U.S. modern history Sunday were apparently outfitted with “bump stock devices,” which are legal.

Demcrats describe the bum stock’s legality as a “gap in the current law” which allows shooters with semi-automatic weapons to accelerate the rate of fire by attaching bump stocks, slide fire devices, and other similar accessories. The bump stock automatically forces the trigger to “bump” against the shooter’s finger after each shot.

“Some have said we shouldn’t do this now,” Feinstein said. “Now is not the time. When is the time going to be there? There is no better way to honor the 59 people who were slaughtered than to take action to prevent this from happening again.” But that’s just the problem with Democrats and their line of thinking. You can’t prevent this. You can’t prevent any evil. No amount of laws are needed to keep a good person from hurting others and bad people will always find their way around heaps of laws to commit crimes if they are so inclined.

On Tuesday, Senate Majority Leader Mitch McConnell, a Kentucky Republican, said it was “premature” to discuss “legislative solutions, if there are any,” when asked whether he could support a ban on equipment to convert semi-automatic weapons into automatic ones. That was a pretty wishy-washy response and could mean he will consider gun laws in the near future. Senator Richard Shelby, a Republican from Alabama, shut down talk of limiting bump stocks quickly. “I’m a Second Amendment man, I’m not for any gun control,” Shelby said. But he may be one of the few. Senator John Thune, a Republican from South Dakota and a member of Senate leadership, said some of his colleagues are “at least interested” in learning more about “that narrow issue.” Thune added, “I am somebody who I’d like to think is fairly familiar with a lot of firearms, and you know the use of those in that incident out there is something I think we need to take a look at.”

Gun control appears on the surface that it will be more easily accomplished now that Republican is in the White House. Barack Obama attempted big gun control legislation in the aftermath of the Sandy Hook school shooting and he failed. He went on to note that gun laws are his “biggest frustration.”

Unfortunately, it’s very likely we will see small bills like this one creep up with some getting passed, while within the next few months, larger bills will surface. And we humbly speculate that security will be heightened at hotels and casinos, and complete with metal detectors at all entrances. There could even be an enormous ramp up in the police state around concerts and gatherings. It could get ugly, but it’s too soon to say just how much, and these are speculations based on the speeches from not only president Trump but other politicians on both sides of the freedom-trampling aisle.