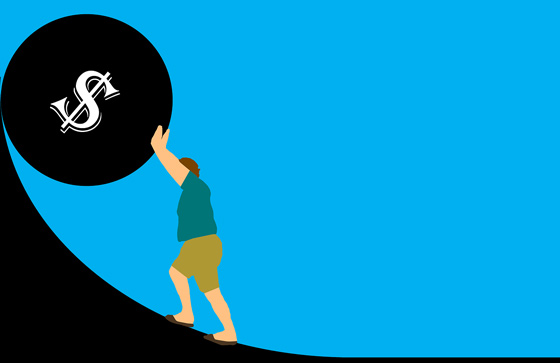 Is the consumer debt bubble finally starting to burst?  If the latest numbers on delinquent credit card accounts are any indication, that appears to be precisely what is happening.  As I noted the other day, Americans currently have 480 million credit cards, and they are carrying 870 billion dollars worth of balances on those cards.  That is one giant pile of debt, but there won’t be a problem as long as the vast majority of Americans regularly make their credit card payments.  Unfortunately, the number of credit card accounts that are delinquent has been steadily rising, and now we are being told that the number of “seriously delinquent” accounts has shot up to 37 million…

At the end of 2018, Americans struggled to make payments on the country’s $870 billion worth of credit card debt.

About 37 million credit card accounts were marked as seriously delinquent in the fourth quarter, meaning they were 90 or more days past due, an increase of two million from the same period a year earlier.

Remember, those accounts are not just behind.  We are talking about accounts that are at least 90 days past due.

It appears that the credit card industry has a burgeoning crisis on their hands.

Meanwhile, the number of Americans that are behind on their auto loan payments has reached an unprecedented level as well.

At this moment, more than 7 million Americans are delinquent on their auto loan payments.  That is a brand new all-time record, and it smashes the highest level that we witnessed during the last recession by about a million.

If things are this bad already, how high will these numbers go once we get really deep into the next recession?

The student loan debt bubble is starting to burst as well.  According to the most recent numbers, over 166 billion dollars in student loan debt is considered to be “seriously delinquent”.  That number has never been higher in all of U.S. history.

Right now, millions of Americans are deeply struggling with student loan debt, and an increasing number of them have decided to give up on making payments completely.

In an effort to combat this, the industry is encouraging a massive crackdown, and what we are currently witnessing in Florida may soon be coming to the rest of the nation.  The following comes from Zero Hedge…

Some 1,000 healthcare workers have lost their licenses to practice in Florida due to their inability to pay off their student debt, a new report claims. The “crackdown”, as described, could potentially put hundreds of people out of work, and comes as a result of student loan companies lobbying states to enact laws that punish those who default on their loans by taking away their professional licenses. However, so far Florida is the only state actually enforcing the law.

Adam Walser, an investigative reporter for ABC, found that the state Board of Health had suspended more than 900 healthcare licenses, including those belonging to registered nurses, nurses assistants and pharmacists, over the last two years. There are additionally 12 other states that still have the power to take away healthcare licenses for unpaid student loans. However, officials in those states said that they haven’t suspended any licenses over the last two years.

In the middle part of the country, farm debt is a major story right now.

Farm debt delinquencies have hit the highest level that we have seen in 9 years, and the global trade war has pushed many family farms to the brink of bankruptcy.

Unfortunately, I don’t think that things are going to get any better for them any time soon.

But I bet that you aren’t hearing much about any of this on the news, are you?

Instead, we are being inundated by mindless stories that really don’t matter.  For example, there is supposedly a huge “controversy” about whether Kylie Jenner is really a “self-made” billionaire or not.

Our country is literally coming apart all around us, and we are supposed to obsess about Kylie Jenner?

On Wednesday, we learned that Dollar Tree Inc. will be closing up to 390 Family Dollar stores in 2019.  When you add that to the other store closings that have already been announced this year, it brings the grand total to nearly 5,000.

Can the mainstream media please talk about our ongoing “retail apocalypse” a little bit more?  That is far more important to the daily lives of most Americans than Kylie Jenner.

The U.S. economy is in really rough shape at this moment, and even the president of the New York Fed is now admitting that our economy will slow down “considerably” this year…

The US economy should slow “considerably” in 2019 as the boost from last year’s economic stimulus fades, the president of the New York Federal Reserve Bank said Wednesday.

Amid economic uncertainty, the Federal Reserve could “wait” before raising interest rates again, John Williams said in remarks to the Economic Club of New York.

For many Americans, the economic horror show of 2008 and 2009 is nothing but a fading memory at this point.  But the truth is that what is coming is going to be even worse than that.  Our financial system is far more vulnerable that it was in 2008, and our debt levels are far, far higher.

This unsustainable bubble of debt-fueled prosperity that we have been enjoying in recent years has lasted for far longer than it should have, and it is just a matter of time before things dramatically deteriorate.

And if the recent debt delinquency numbers that I just shared with you are any indication, we are a lot closer to economic doomsday than most people would dare to imagine.