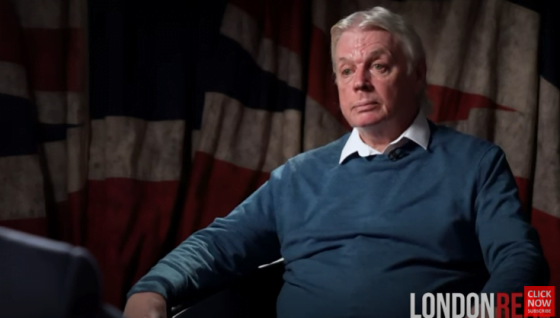 David Icke has been censored and all but banned from speaking, however, London Real’s Brian Rose isn’t backing down on free speech. In a new video with Rose, Icke tells the military and law enforcement officers who are imposing the governments’ will and enslavement on the public to “look your children in the eye” and tell them you enforced this tyranny.

No one wants to look deeper, but Icke has the solution to humanity’s enslavement. Simply stop acquiescing to power.

No one wants to wake up to the fact that unless there are “enforcers” willing to shove the government’s agenda of enslavement down our throats, no one would comply and willingly enslave themselves.  The fact that there is a gigantic police state funded by the very people the government is trying to enslave right now is one huge concern that Icke has the guts to bring to light.

Icke doesn’t care about feelings in this video.  He does care about humanity and our future.  It takes courage to stand up right now and speak truth not only to power but those allowing the psychopaths to remain in power.

Icke says of the enforcers of tyranny:

“Your children and your grandchildren are going to have to live in the world you are enforcing. Same with the military…you’re enforcing laws not to protect the public, but to protect and enforce the will of a cult that makes psychopaths look like Mother Teresa.

What are you doing? Look your children in the eye, look your grandchildren in the eye and tell me you’re going to go on enforcing a fascist tyranny that is going to ensnare those kids as much as anyone else’s. Take your uniform off! Leave the force. Now tell me how you feel about what you did before. Now YOU are subject to what you were doing before.”

Icke says sitting and doing nothing is the worst thing we can do.  What have people got to lose at this point? Most people have lost everything under the boot of tyranny anyway.

“You know what’s happened as a result of this lockdown? Humanity has nowhere to run anymore. So, what are you gonna do now? Are you just gonna take it? You gonna let the tiny few do this to you?

“I’ll tell you what I do. I go whenever I like; whenever I frickin’ choose.…it’s not about health. It’s about control.”

People are finally waking up to this fact in droves.  It took the advent of total and complete tyranny for people to realize they were slaves shackling themselves, but now, they are figuring it out. People all over the world are waking up and we have the power to stop obeying and enslaving ourselves and others.  What’s the answer and the solution?

Stop bowing to the illusion of power. A handful of tyrants have claimed power over the lives of 8 billion people.  Stop believing others have the right to rule you.

“We got into the fricken’ mess through acquiescence to power. Most of that power; all of that power is simply our perception that it has power. So if we got into this mess by acquiescing to the illusion of power, what’s the frickin’ answer? Ceasing to do so. And then we’ll see where the real power is and it is not with the few.

This could be the turning point when humanity got off it’s frickin’ knees.”