Daddy Saves Campaign As Jeb Throws Tantrum: “I’ve Got Cooler Things to Do… Elect Trump If You Want” 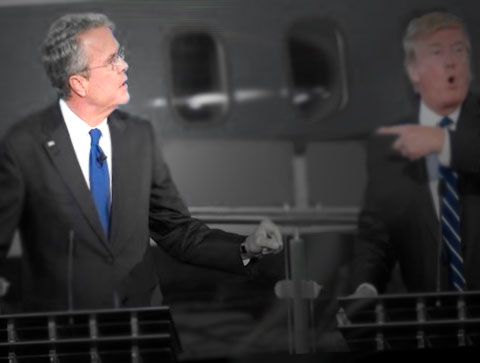 Elder Bush faces the prospect of having to watch his favorite fortune son fail at his attempt to claim yet another Bush presidency – all in the twilight of Bush 41’s life – who is now 91 and in failing health.

After reports say he has angrily watched the primary season include routine jabs at the expense of his son Jeb, former president George H.W. Bush is calling to arms his vast network of patrons and wealthy donors to get his kid out of trouble, and force his tanking campaign to the top with the only way they know – the power of big money and sneaky political maneuvering. The Houston Chronicle reports:

Even at age 91, former President George H.W. Bush remains hooked on politics and the upcoming presidential election. He follows the coverage on Fox News, champions the campaign of GOP candidate and son Jeb Bush and – like many on the left and right – he remains absolutely baffled by Donald Trump’s success.

The New York Times profiled the elder Bush on Saturday ahead of a Houston donor retreat over the weekend. The Bush family and supporters are trying to reinvigorate Jeb Bush’s flagging campaign, and, at the same time, they vented about the success of one former reality TV star.

The story contains a number of exciting quotes about the Bush family’s “contempt for Trump.” He reminds the elder Bush of third-party candidate Ross Perot, who the family believes “helped Bill Clinton capture the White House from Bush in 1992.” The former president also has been livid about the way Trump has prodded at son George W. Bush over the Sept. 11 attacks.

Where the anger comes from is evident. The Bush family isn’t just upset that Trump can be vulgar. The family also sees their political dynasty fading after six decades of success.

With massive cutbacks for staff and budgets across the board of the Jeb! campaign, the media is universally signaling the sinking of the Bush campaign – despite typical expectations for an establishment-favorite candidate to be handed the nomination. Instead, Jeb faces a voting public that has “Bush fatigue,” who distrust the status quo, find Bush III boring among a crowded GOP field, and – most of all – are endeared to the defiant statements of Donald Trump, who is voicing an angry populist sentiment.

Despite all the advantages and expectations of becoming president, Jeb faces the very real possibility of utter and embarrassing defeat – all by the hands of the irreverent TV reality star of The Apprentice. None of the 2016 election is going according to script for Bush, despite all the precautions to ensure easy victory.

For his part Jeb, who seems to feel entitled to the presidency, is getting downright bitter about Trump – coming off as a certifiable whiner (when he wishes to be seen as a winner):

If this election is about how we’re going to fight to get nothing done, then I don’t want anything — I don’t want any part of it. I don’t want to be elected president to sit around and see gridlock just become so dominant that people literally are in decline in their lives. That is not my motivation. I’ve got a lot of really cool things I could do other than sit around, being miserable, listening to people demonize me and feeling compelled to demonize them. That is a joke. Elect Trump if you want that.

With an adolescent attitude, Jeb tells the electorate he doesn’t need them. He wants the presidency, but he could do without the people, quite clearly. And that is the heart of the problem between the country and the ambitions of the Bush dynasty:

Bush doesn’t want to run a campaign that’s just about trading insults with other Republicans — but the way it comes off is that he is running for office as a favor for the American public and, if it doesn’t work out the way he likes it, well, then, he has got far better things to do. (source)

Quite simply, Bush has been outmaneuvered, and they Bush family is fuming about it. And with an anger they consider justified, they are prepared to wage emergency war for the survival of Jeb’s campaign. Donald Trump is in the crosshairs, and he is loving it.

But funny enough, just the Bushes are getting serious, Trump has vowed not to pick on Jeb anymore – suggesting with derision that he thought he would be the front-runner:

Having spent months mocking Bush for his low energy level, this line from Trump could be either a moment of rare sympathy from the real estate tycoon-turned-candidate, or the cruelest insult yet.

Considering how rigged elections have become, it may be yet another tactic to portray Jeb as the underdog worthy of pity, but judging from comments across the Internet, no one is feeling sorry for the Bushes they are so happy to be done with.

Perhaps the Washington Post is correct, and this really Jeb’s big opportunity to come back swinging at Trump, though voter attitudes have made clear that Bush would gain office with no greater consent from the American public than a date rape victim.