Crack In East African Rift: Continent Is ‘Splitting In Two’ 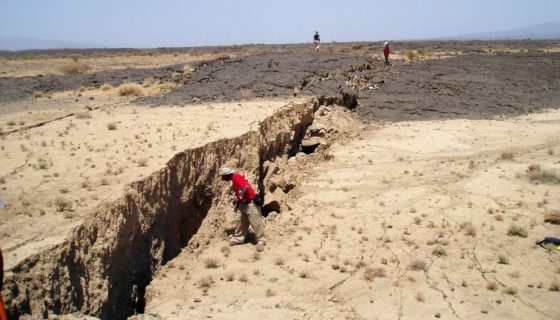 A large crack, spanning several kilometers, made a sudden appearance recently in south-western Kenya. The tear, which is continuing to grow, is evidence to scientists that the continent is “splitting in two.”

The huge crack caused part of the Nairobi-Narok highway to collapse recently and was accompanied by seismic activity in the area. The East African Rift Valley stretches over 3,000 kilometers from the Gulf of Aden in the north towards Zimbabwe in the south, splitting the African plate into two unequal parts: the Somali and Nubian plates. Activity along the eastern branch of the rift valley, running along Ethiopia, Kenya, and Tanzania, became evident when the large crack suddenly appeared in south-western Kenya.

Rifts exhibit a very distinctive topography, characterized by a series of fault-bounded depressions surrounded by higher terrain. In the East African system, a series of aligned rift valleys separated from each other by large bounding faults can be clearly seen from space.

A crack that opened up in Kenya’s Rift Valley, damaging a section of the Narok-Nairobi highway, is still growing… pic.twitter.com/T5YocDauYj

An example of a place on Earth where this has happened before is in the South Atlantic Ocean, which resulted from the break up of South America and Africa around 138 million years ago. Those coastlines match like pieces of the same puzzle.

Continental rifting requires the existence of extensional forces great enough to break the lithosphere. The East African Rift is described as an active type of rift, in which the source of these stresses lies in the circulation of the underlying mantle. Beneath this rift, the rise of a large mantle plume is doming the lithosphere upwards, causing it to weaken as a result of the increase in temperature, undergo stretching and breaking by faulting. –PBS

Evidence for the existence of a “hotter-than-normal” mantle plume has been found in geophysical data and is often referred to as the “African Superswell.” This superplume is not only a widely-accepted source of the pull-apart forces that are resulting in the formation of the rift valley but it has been used to explain the anomalously high topography of the Southern and Eastern African Plateaus.