Cops Arrest 76-Year Old Veteran For Town Meeting ‘Outburst’: “I Asked Them To Speak Louder So We Could Hear” 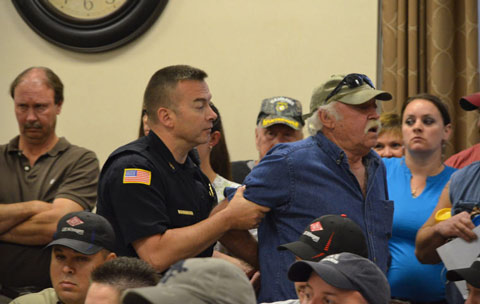 Eddie Overholt was attending his second county board meeting last Friday when he was arrested by police for interfering with a public meeting and resisting arrest for the dastardly act of asking county officials to speak up so that the audience could hear the proceedings.

According to 76-year old Overholt and others present at the meeting, the board had assembled around a table at the front of the room. Some city officials were turned with their backs facing the crowd making it difficult to hear what was being said.

Members of the audience began interrupting the proceedings with shouts, laughter, applause and complaints that they couldn’t hear, at which point the mayor warned the next outburst would lead to someone being removed from the building.

At this point Overholt, who had been making his way to the front of the room, addressed the mayor and the board and said, “would y’all speak up so the audience can hear you?”

The mayor subsequently ordered the local police chief to remove him from the building, to which Overholt protested that he was attending a public meeting and needed to hear, not just ‘look’ at what was happening.

In a statement posted to Facebook Overholt explained that, as he was being walked to  jail, the arresting officer added another charge for resisting arrest:

Since there are no videos after the arrest and handcuffing, ‘my first,’ goes as follows.

On the way down the steps the officer called for a transport, but very shortly canceled the transport, saying he was ‘walking me down.’

As we started the walk, I asked him his name. Having had a small restaurant on Depot Street, across from the jail, a few years ago, I thought I might have known him.

As we started the walk, I asked him his name. Having had a small restaurant on Depot Street, across from the jail, a few years ago, I thought I might have known him.

This question seemed to agitate him. He told me his name was Dixon or Hixon, and very abruptly increased the pressure and lift on my right arm, pulling my shoulder up into a very painful position, causing me to walk very awkwardly.

After a few steps I told him I had a very bad back and hips and would have to sit or lean against something, at which time he lifted my right arm higher and stated that I had no trouble walking forward in the meeting room.

His next words were, ‘You are charged with resisting arrest.’ [He] got on his radio and called for backup. Another officer pulled up but did not get out of his car.

Overholt now stands charged with ‘interfering with a public meeting’ and ‘resisting arrest.’ His wife bailed him out of jail pending his court date.

“This was a painful and humiliating experience to go through with a Police Department and county officials at the ripe old age of 76,” he said after being released.

County officials and police refuse to speak about the incident because they say it is an open case and still being investigated.

There was no audio or video equipment being used at the meeting, so no record of the incident exists.

A simple microphone, like those utilized at thousands of town hall meetings around the country, would have probably prevented the incident from ever taking place.