Connecticut Patriot Group Fights Back Against Confiscation Order: ‘We Are Armed… And Are Familiar With the Finer Points of Marksmanship’ 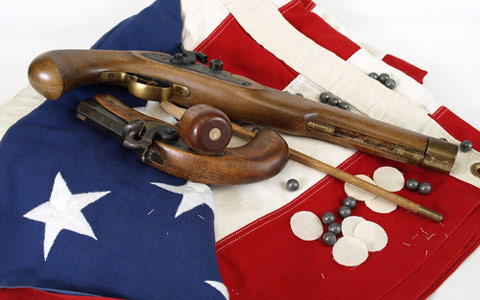 The war on liberty is coming to a head in Connecticut, where tens of thousands of gun owners have refused to comply with their state government’s gun registration laws. Officials have literally ordered those who failed to meet the registration deadline to surrender their firearms or face arrest.

The State of Connecticut is now demanding that gun owners across the state turn in all newly-banned, unregistered firearms and magazines or face felony arrest.

The State Police Special Licensing & Firearms Unit began mailing out notices to gun owners who attempted to register their firearms and accessories with the state but did not do so in time for the Jan. 1 deadline of Connecticut’s newly enacted gun control law.

The law bans the sale of magazines holding over 10 rounds and “assault rifles” manufactured after 1994 and requires that residents who possessed either before the ban to register them with the state.

It doesn’t take a stretch of the imagination to understand that the enforcement of this law can only come at the barrel of a gun. Therefore, we can conclude that we may soon see SWAT-style raids on the homes of suspected law breakers. Because we’re talking about gun confiscation, you can be fully assured that the state will not be knocking nicely, and they won’t be asking residents to exist their homes.

But Americans simply don’t take well to being told what to do, especially as it relates to their Second Amendment rights.

These unreasonable demands, which have yet to pass muster with the U.S. Supreme Court, have prompted Mike Vanderboegh of Connecticut’s Sipsey Street Irregulars to go on the offensive. Earlier this week Vanderboegh publicly posted the names, addresses, phone numbers and provided direct access to pictures of all CT legislators involved with passage of the gun confiscation bill, saying that since the government has a list it “seems obvious to me that it is thus only fair to list those anti-constitutional tyrants.”

The state of Connecticut is making lists of firearm owners to raid. It seems obvious to me that it is thus only fair to list those anti-constitutional tyrants who will have blood on their hands the moment the first Connecticut citizen is shot by the CT state police while carrying out their orders. I will be sending these folks my own email later today.

As promised, Vanderboegh followed up his list with an Open Letter to the Legislative Tyrants of Connecticut sent to all CT legislators where he extensively details the impact of Connecticut’s new law and which he closes with a plea to legislators in an effort to prevent the potential for violence that may result in the event of a state-mandated gun confiscation:

To the CT State Senators And Representatives who voted Yes on “An Act Concerning Gun Violence Prevention and Children’s Safety, also known as Public Law 13-3 or Connecticut Senate Bill No. 1160,” 3 April 2013.

And, yes, I said tyrants. You bought it, in the form of the woefully misnamed “Act Concerning Gun Violence Prevention and Children’s Safety,” you own it, you are certainly — if you get your way — going to pay for it like it or not, so you might as well own up to it. Look in the mirror. That’s what a tyrant in the 21st Century looks like. Mather Byles, the Massachusetts Loyalist of the Revolutionary period — our first civil war — once famously asked, “Which is better – to be ruled by one tyrant three thousand miles away or by three thousand tyrants one mile away?” The Founders themselves were just as suspicious of unrestrained democracy as a means of tyranny. This is why they gave us a republic of limited powers and the rule of law, to limit those who would misuse democracy to create a new tyranny. Yet that is precisely what you’ve done. Own it.

You know, in Greek mythology Cassandra, the daughter of King Priam and Queen Hecuba of Troy, was given the gift of prophecy. She could see exactly what was going to happen to her endangered city. Yet she was also cursed with the burden of never being believed. The frustration was said to have driven her mad. Never have I come closer to understanding Cassandra’s curse than these past months.

We are at a crossroads. You, in the arrogance of your power and your ignorance of the people you seek to dominate are extrapolating from your own cowardice — you believe that just because the government orders these folks to knuckle under that they will do so BECAUSE THAT IS WHAT YOU WOULD DO. You mistake them, and your mistake is, in the fullness of time, going to get people killed. And who do you think these people who you victimize — these people who you will have state agents seek to round up and kill — who do you think they are going to blame for that? It doesn’t take Madame Lawlor and his crystal ball to predict that such people — victimized by their own state authorities in an unconstitutional law that likely will be found to be null and void anyway — will blame the people who sent the killers. Which is to say, you. (13)

This is deadly serious stuff, this foray into an undiscovered country that you have so blithely entered upon, like blind men and women tap dancing in a minefield you scarcely comprehend. Fully eighty-five percent of the people you targeted with the law — the people that YOU AND YOU ALONE made into lawbreakers — have just told you by their noncompliance to take your unconstitutional law and stick it where the sun don’t shine. Does that not tell you ANYTHING? These people are ARMED.They are familiar with the finer points of marksmanship. They are principled in a way that perhaps only the Founders would understand — at the risk of their own lives. So what part of “Oh, HELL no” don’t you understand? You have been playing with titanic forces. You are going to send armed agents of the state to their doors to work your collective and collectivist will upon THEM? You have unintentionally sown the wind and if things go predictably south you will reap the whirlwind.

BUT IT IS WITHIN YOUR POWER TO REVERSE. You own the weather machine, as it were. I’m not asking you to repeal the law, although that makes perfect sense to me. No, I realize that too much of your ego, your own false vision of omnipotence is wrapped up in it to do THAT. What I am asking you to do — no, what I am BEGGING you to do — is to use your power to suspend the enforcement of that Intolerable Act at least until it is ruled constitutional or not by the United States Supreme Court. “An unconstitutional law is null and void.” Do you really wish to risk death and destruction upon innocent people — upon us all — on a bet against the odds? Is your appetite for your own citizens’ liberty, property and lives that insatiable? Or now, as the likely unintended consequences of your actions have been directly explained to you, are you willing to reconsider the menu choices? What will your political fortunes be when the first shots are exchanged over this? When the first innocents are killed in carrying out your will? What will your arrogance, your ignorance, your insufferable pride be worth to you then? What will it be worth to any of us? Starting a bloody civil war seems an odd way to avoid “violence against children.”

Praying that my advice fares better than Cassandra’s, I am, sincerely,

Smuggler and alleged leader of a merry band of Three Percenters

(You can read the full text here)

The importance of what’s happening in Connecticut and how its citizens are responding cannot be understated. What we have here is a government that has directly violated the Second Amendment of the United States of America by legislating forced gun registration with the penalty of confiscation of said firearms and felony imprisonment for those who refuse to comply.

They have now threatened all Connecticut residents with arrest if they refuse to turn over their firearms.

In coming days and weeks, unless Mike Vanderboegh’s warnings are heeded, we will begin to see police-state raids of homes belonging to anyone suspected of owning an unregistered firearm or accessory.

Keep in mind that this legislation has not yet made it to the U.S. Supreme Court, so Connecticut state officials intend to confiscate guns through the use of force and without a judiciary review of the Constitutionality of the laws they passed.

If Connecticut goes through with this and sends heavily armed police personnel to the doors of Constitutional Law-abiding citizens it is not out of the question to suggest that we will see bloodshed and violence when these gun confiscations begin.

The people have had enough and many Americans are preparing to stand their ground.