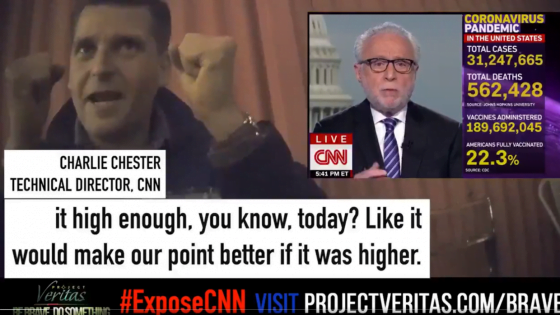 In a released undercover video by Project Veritas, CNN admits that they use “fear” because it “really drives numbers.”  Their “death map,” which we know is fabricated was displayed to keep people afraid and tuning into the propaganda.

CNN’s technical director Charlie Chester admitted that the “death tracker” is straight-up fear-mongering to panic the sheep. “Covid? Gangbusters with ratings, right? Which is why we constantly have the death toll on the side,” Chester said in the video, which was posted on social media on Wednesday.

The CNN employee also revealed that he wanted to make the death tracker scarier and further inflate the numbers. “I’ve even looked at it and been like… let’s make it higher,” he said. “Like, why isn’t it high enough, you know, today? Like, it would make our point better if it was higher. And I’m like, what am I f**king rallying for?”

Chester conceded to the undercover Project Veritas reporter that despite such concerns, hyping fear yields higher ratings, which helps keep him employed. He noted that on many occasions where his director has told him to remove the Covid-19 death tracker from the screen, the network’s chief (Jeff Zucker) has called on a special red “bat phone” to order that it be restored, according to a report by RT.

“Every so often they put it on speaker, and it’s like the head of network being like, ‘There’s nothing that you’re doing right now that makes me want to stick. Put the numbers back up because that’s the most enticing thing that we had. So put it back up.’”

CNN also admits to participating in the government’s agenda. If someone, anyone, in politics or not is a problem for the democrat party, they will “keep hurting [them.]

Chester admitted there are also “too many agendas” for the news to be unbiased. If we had unbiased news, we would all have figured out the government is the true enemy of the people, is enslaving us, and they would have been disobeyed out of existence years ago. But the news keeps people in a submissive state to the rulers.

Beyond making fear-based coverage decisions – “if it bleeds, it leads” – CNN often presents its stories in a biased way, Chester admitted. “There’s no such thing as unbiased news,” he said. “It just doesn’t exist. There’s too many agendas. There’s too many people that have jobs, that need to feed families, for it to be unbiased.”

According to further reporting by RT, Chester said CNN and rival Fox News are essentially the same in their biases, except they stand on opposing sides of the political spectrum. Their goal is to get you to take a side and stay divided. Because if you take a political side, you’ll remain enslaved to the ruling class.  The left vs. right paradigm serves only the masters.  If we continue to participate, we’ll continue to be treated like the slaves we are showing ourselves to be.

He added that all CNN reporters (and likely reporters on all mainstream media networks) are able to manipulate people in interviews – using inflection, repetition, and other techniques — to spin the focus of a story to their liking.

“Listen to the way they ask questions because they’re not actually asking questions,” he said. “What they’re actually doing is, they’re telling the person what to say. It’s an art form in there. There’s an art form to it.” Chester added that “it’s always like leading them in a direction before they even open their mouths. And the only people that we will let on the air, for the most part, are the people that have a proven track record of taking the bait.”

Remember, they have to feed their families but pushed to lockdowns to prevent us from doing the same. Have you figured it out yet? The entire system is designed to destroy us. None of them are on our side. We were born to be free, not enslaved to anyone. It’s past time to unite and understand that government is slavery and it always has been. They’ve just conveniently changed the narratives to make it look more appealing.