Claim: We Found the Holy Grail: “The Cup Which Touched the Lips of Jesus Christ” 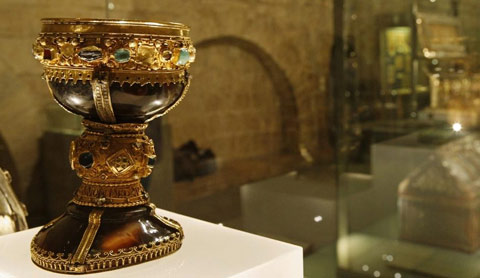 Then He took the cup, and gave thanks, and gave it to them, saying, “Drink from it, all of you. For this is My blood of the new covenant, which is shed for many for the remission of sins. But I say to you, I will not drink of this fruit of the vine from now on until that day when I drink it new with you in My Father’s kingdom.”
Matthew 26:27-29

(Pictured: The Infanta Dona Urraca identified as the legendary Holy Grail of scripture)

It was shared with his disciples at the last supper and just days later St. Joseph of Arimathea used it to collect the blood and sweat of Jesus Christ as his grand-uncle tended to him on he cross. When he was subsequently imprisoned in a tomb for several years Joseph reportedly sustained his life with its power by consuming fresh water and food from it until his release. At that point it was reportedly transferred to a spectacular castle in a region called Corbenic somewhere in modern day England. The location of the castle itself has been veiled in secrecy and purportedly lost to history.

But the legendary story didn’t end there.

The Knights Templar searched Europe and Arabia for it, as did the Nazi’s during the middle of the 20th century. Historians and treasure hunters the world over have spent centuries looking for the Cup of Life and today some 200 chalices lay claim to the title of “The Holy Grail.”

But according to a new book titled Kings of the Grail, two researchers claim they have conclusive evidence that they have found the one and only, true Holy Grail of scripture. After a three year quest involving analysis from ancient documents, starting with an Egyptian parchment that describes the grail in detail, authors Margarita Torres and Jose Manuel Ortega del Rio say there is absolutely “no doubt” that the cup which touched the lips of Jesus Christ has been identified.

Their research led them to a a museum in San Isidro Basilica in the northwestern Spanish city of Leon, where the cup has been on display in a small viewing room for years.

The supposed Holy Grail was offered to King Fernando I, who ruled between 1037 and 1065, as a peace offering by the head of a Muslim kingdom within Spain, the historians said.

The cup, made of agate, gold and onyx, is actually two goblets formed together, the authors claim.

The artifact had been known until last week as the goblet of the Infanta Dona Urraca, King Fernando I’s daughter.

With so many other historical investigations making similar claims the evidence for the Infanta Dona Urraca being the Grail has yet to be scrutinized by scholars, but Torres and Ortega del Rio are certain they have found the treasure of the ages. 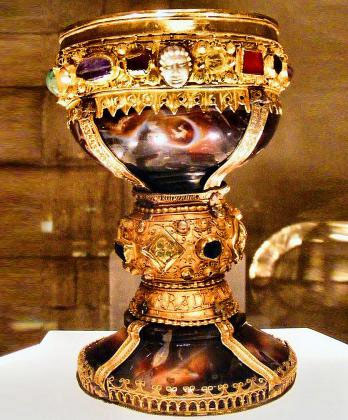 At first glance, the jewel encrusted Grail is the opposite of what one might expect a carpenter’s cup would look like. But according to the researchers the jewels and other accouterments were added much later.

There is ‘no doubt’ it contains the cup which touched the lips of Jesus Christ, two historians claim.

In an explosive book charting three years of ‘scientific research’, Margarita Torres and Jose Ortiza del Rio reveal there is conclusive evidence from scrolls in Egypt that confirm their theory.

The onyx vessel made between 200 BC and 100 AD, they claim, is trapped inside a bejewelled medieval chalice.

According to two medieval documents written in Arabic, it was stolen from Jerusalem by Muslims, who gave it to the Christian community in Egypt.

Centuries later, in around 1050 AD, it was sent as a gift to King Fernando I of Castile to thank him for sending aid during a famine, they say.

By that point, it had been concealed with opulent decorations.

Gold inside, with patterns etched around the edges, the revered ornament is covered with pearls, emeralds, amethysts and sapphires, which the Egyptian kings will have designed to honour the well-liked Fernando.

It is said that those who drink from the Grail can attain eternal life, a legend depicted in various stories and perhaps most popularly by Indiana Jones. But many believe these to be fables created over the years to advance Christianity, namely during the Christian crusades.

Whether the mythical vessel for Christ’s blood has actually been found, or that it holds special powers such as those used to sustain Joseph’s life during his imprisonment, is left to one’s imagination.

But that a hunt for the treasure is still being actively pursued after twenty centuries is, at the very least, intriguing.