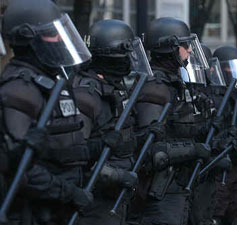 With negative interest rates now the order of the day in much of the Western world, it’s only a matter of time before financial institutions start charging American depositors for the privilege of keeping their money safe in the U.S. banking system.

And according to Keith Neumeyer in his latest interview with SGT Report, that could spell disaster for socio-economic stability. Neumeyer, who is the CEO of one of the world’s top primary silver producers First Majestic Silver and the Chairman of mineral bank firm First Mining Finance, says that should The Fed and government policy makers implement negative interest rates and continue on their current course of bailing out big business while impoverishing average Americans, we could well see riots in the streets.

I think there’s going to be a major revolt… If we actually do see negative interest rates in North America…  we’re going to see riots.

The Fed has lost credibility. And that has left the average person on the street with an air of uncertainty and concern over the stability of the system.

This, says Neumeyer, is why many investors, both large and small, have started turning to tangible assets as a safe haven.

The Fed is losing credibility… there’s talk of negative interest rates… people are looking to gold now as a safe haven to be in as protection against these major forces that are occurring in the world.

But it’s not just the retail investor that is terrified of the consequences of Fed policy.

We’re seeing State mining companies go on an acquisition spree looking around the world for gold mines to buy. They are very bottom-up players… very long-term players… a lot of the people we’re talking to are actually looking to buy gold mines…

Last year Neumeyer warned that a global reset is in the cards for sure and urged investors to start positioning themselves for that eventuality. He also famously penned an open letter to the CFTC highlighting the rampant manipulation in the system in which he claimed that a small concentration of market players were attempting to control the price of silver through paper trading.

But that manipulation will eventually become ineffective, he says, because industrial and retail demand for physical silver will overwhelm the paper markets:

I’m a believer in the market. We go through phases where we have imperfections… and that’s one of the areas now that we have a price fixing mechanism that is very inefficient… it is very damaging to the miners… it’s damaging for investors who believe the metal should be at higher prices… so as long as the regulators allow the banks to sell unlimited amounts of silver and gold, I’m not sure if the system can ever be fixed on its own.

What I think is going to happen is there will simply be a physical shortage of metal. We’re consuming more silver today than we ever have as a human race. The use of silver is climbing each year. We’ve seen production in 2015 drop from 2014 in silver. It looks like 2016 is going to be another year for lower silver production as well.

Silver is a very rare metal and people don’t understand that. We’re currently mining on a global basis 10 ounces of silver for every 1 ounce of gold.

… The regulators are sitting on their hands… the banks are making too much money… there’s no incentive to change the system… but it will be a supply squeeze that will eventually change the system.

As SGT Report echos, there is no incentive for them to change the system except for the time when people actually do reach their boiling point and start to march in the streets because they’ve been thrown under the bus for much too long.

And when those riots do start, just as Zero Hedge previously reported during the Greek riots, the price of physical precious metals versus the bank manipulated paper prices will skyrocket. In 2010 the price difference between the two was as high as 40% above the paper spot price as Greeks scrambled for real money in the midst of their country’s collapse.

Things will be no different in America when a jobless, hungry, and marginalized majority takes to the streets. When that comes to pass we will see the real value of physical silver and gold emerge, and you can be almost certain that it will be significantly higher than the suppressed paper prices the banks want us to believe.