Caught Live On C-Span: Congressman Picks His Ear Wax… And Eats It 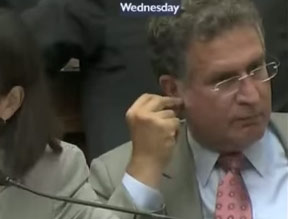 Congressman Joe Garcia may have a tough go convincing voters he’s the man for the job during this year’s re-election campaign.

A live video of the Democratic Party’s distinguished gentleman from Florida’s 26th Congressional District happened to catch the freshman Representative picking the wax out of his ear. After a few moments Garcia can be seen eating said wax for a snack.

Can you say political suicide?

The video has been circulated around the internet, most notably by the National Republican Congressional Committee.

Update: Rep. Joe Garcia (D-FL) has provided a short response to the video:

“My mom always told me to keep my fingers out of my mouth, and now I know why.”