Cash on Lockdown: Bankers “Want Badly to Charge YOU Interest for Depositing YOUR Funds” 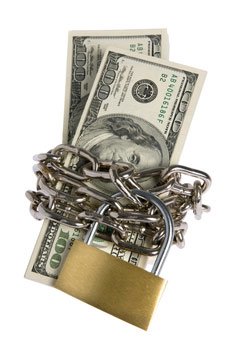 Cash is quickly becoming a liability.

SHTF has been closely following the recent calls from Wall Street to ban cash and implement a system that would force everyone to operate on the grid, even as interest rates have hit negative and customers are actually charged for keeping money in the bank.

For most observers, negative interest rates signals a bizarre and unsustainable economic landscape, but for those calling the shots, the negative rates are a necessary by-products of capital injections by the Federal Reserve over the course of its quantitative easing operations.

The biggest problem with these negative rates – besides the fact that they defy logic and send the wrong signals to investors – is that there is every reason to withdraw cash and stash it, rather than be charged to keep deposits in the bank.

But that’s exactly what the system wants to FORCE you to do. Money Metals Exchange explains it well:

Depositors already complain vigorously about zero percent returns on checking and savings accounts. If they must start actually paying the bank to hold funds on deposit, many will opt to simply withdraw the cash and stuff it under their mattress or into a safe deposit box. That simply won’t do.

As author Clint Siegner notes, the problem is preventing cash from swiftly evacuating banks, where fees can no longer be assessed. Government institutions and banks are now setting policies to keep people from running on the banks and operating outside their controlled system:

[The Swiss National Bank] is encouraging retail banks to be “restrictive” with regards to cash withdrawals. And it is berating actors such as the pension fund for trying to circumvent negative interest rates. Apparently no one should be questioning the wisdom behind the policy! But the bluster isn’t hiding the fact that bankers stand upon shaky legal ground. The potential for a run on the banks remains.

The desired solution, as you see below, is in forcing compliance with new bank fees by criminalizing cash, restricting its use for certain payments and above certain amounts, as well as creating policies banning the storage of cash, gold and silver coins in safety deposit boxes and other storage vehicles.

These are all topics that SHTF has covered recently:
Expert Says “Banning Cash” The Only Solution to Negative Interest Market Problems

Banned: Chase Bank Says You Can No Longer Store Cash or Precious Metals In Your Safe Deposit Box

Recently, Citigroup economist William Buiter called to “abolish or tax cash,” blaming it for interfering with the effectiveness of negative interest rates:

When economic conditions worsen… they can bring interest rates to zero, but reducing them further below that is fraught with problems, the biggest of which is cash in the economy.

As SHTF noted, Jamie Dimon, head of JPMorgan Chase, called on banks to charge for outmoded payments like cash and checks in his recent letter to investors, signalling a climate centered around digital currency… and with it, control:

Moreover, JPMorgan and other big banks are expanding their policies of charging customers to hold deposits, validate funds and make transactions – charges that JPMorgan sees as the “true cost of moving money.”

With new measures for cybersecurity, fraud protection and payment verification in mind, JPMorgan is slated to tack on new processing fees and add costs for all transactions, and especially ‘outmoded’ payments like cash and checks and the loafing “free riders” who use them:

For example, it costs retailers 50-70 basis points to use cash (due to preventing fraud and providing security, etc.). And retailers often will pay 1% to an intermediary to guarantee that a check is good. A guaranteed check essentially is the same as a debit card transaction for which they want to pay 0%. For some competitors, free riding is the only thing that makes their competition possible. Having said that, we need to acknowledge our own flaws. We need to build a real-time system that properly charges participants for usage, allows for good customer service, and minimizes fraud and bad behavior.

For the bankers and power brokers in charge, the digital market has all the advantages for profit and control. Their need to phase out cash goes hand-in-hand with their desire to force customers to pay more for less.

The ground market where cash is frequently used by ordinary people where transactions are not tightly controlled and monitored goes against the aims of not only Wall Street, but the larger system of population control.

Buiter, the proponent of abolishing cash, acknowledges but dismisses the importance of these drawbacks and unfair intrusions into our daily lives, stating:

Abolishing currency would inevitably be associated with a loss of privacy and create risks of excessive intrusion by the government.

As Money Metals Exchange explained, these policies are not established to create prosperity for the most people possible in a reformed market – they are simply there to “herd” the masses into schemes by the central planners, who hold the ultimate power:

If depositors’ response to negative interest rates is predictable, so is the reaction from central planners. Effective herding is all about limiting the escape routes for members of the herd.

Eliminating physical cash may well be a longer-term project, but it is not something the Fed can likely implement any time soon. In the meantime, there are other ways to prevent depositors from making their escape.

For starters, officials can criminalize the use of cash above certain amounts …

Banks can also implement new policies of their own.  […] The bank will no longer accept cash from customers who want to use it to make mortgage payments, pay credit card balances or to cover their automobile loan.

Chase also rolled out new restrictions on what can be put into safe deposit boxes [the agreement] states, “You agree not to store any cash or coins other than those found to have a collectible value.

As digital control replace free exchange of currency, the economy reaches the point of total control and only restrictive, subservient activities are allowed.

Nothing has been fixed since the 2008 economic crisis… it is only freedom and the ability to restrict the takeover that has moved forward.