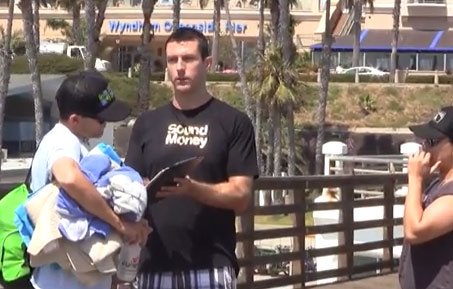 Editor’s Note: Give some people the right keywords – like “Support Obama” or “Support the Troops” – and they’ll agree to just about anything…

Illustrating once again how many Americans’ knowledge of the Bill of Rights is virtually non-existent, Californians signed a petition to repeal the Third Amendment and allow U.S. troops to commandeer their homes.

Dice managed to persuade several passers by to sign their names up for scrapping the Third Amendment, which states “No Soldier shall, in time of peace be quartered in any house, without the consent of the Owner, nor in time of war, but in a manner to be prescribed by law.”

“We want to repeal the Third Amendment to keep the housing prices down for the military folks… just support Obama and support the troops.” Dice told one passer by who then eagerly signed his name.

“These military folks are clean and orderly people, so they won’t dirty up your house too much whilst we eliminate the Third Amendment and you can quarter them in your house if they just want to come in.” Dice told another man who was signing up without question.

“They (soldiers) can choose what house they want to live in, maybe in your house or anybody’s house really.” Dice told another woman who signed her name. “That whole not quartering troops during peacetime, Third Amendment is just kinda unfair, right?” he asked the befuddled woman.

The Third Amendment, introduced by James Madison as part of the Bill of Rights in 1789, was a direct response to Quartering Acts passed by the British government during the Revolutionary War. The British legislation would have allowed British troops to live in the private residences of Americans. The Amendment was adopted on March 1, 1792.

“By repealing the Third Amendment we could increase their housing options. Maybe they could do some house sitting and things in a house that they choose.” Dice ludicrously explained to a young couple who signed their names. “We’re just trying to modernise the Bill Of Rights,” Dice added as they laughed and agreed.

Two other young women simply agreed with everything Dice said even though most of it was nonsense. “They should be able to come into your house and they can quarter there forever if they want to.” Dice stated, as the women both replied “oh yeah definitely” and “I agree”.

Other people didn’t seem to understand what the term “Third Amendment” even meant.

Dice has now successfully managed to get Americans to agree to repeal the First, Second, Third, Fourth ,Fifth, Sixth and Seventh Amendments, as well as the entire Bill Of Rights.

Steve Watson is the London based writer and editor for Alex Jones’ Infowars.com, and Prisonplanet.com. He has a Masters Degree in International Relations from the School of Politics at The University of Nottingham, and a Bachelor Of Arts Degree in Literature and Creative Writing from Nottingham Trent University.