BULLETPROOF VEST IS ON: Big Money IS LIQUIDATING NOW!

For the past 28 years, ever since the Clinton (1992) victory and probably WELL BEFORE it, institutional money has ALWAYS BEEN selling equities in the month leading up to the elections.

Once a winner was announced, the same investors would REENTER EQUITIES.

It’s a predictable pattern because all sorts of presidents have won from both parties under INNUMERABLE DOMESTIC conditions; it seems that buying before the elections is a buying opportunity in most cases.

The most successful fund manager of all time, Peter Lynch, has summed it up in the most simplistic manner: the downside in stocks IS NOTHING compared with the upside, and he’s so right. 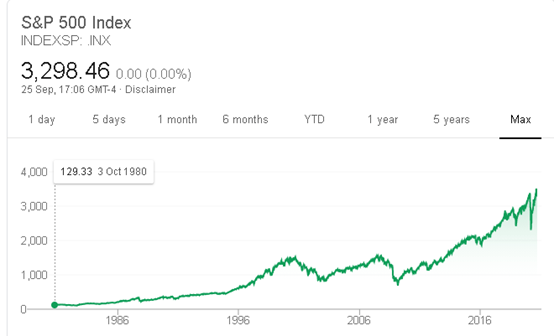 From October 3rd, 1980, can you even BEGIN TO IMAGINE the total amount of BULLSHIT NEWS that was probably thought of as imminent danger and a reason to go ALL-IN on CASH, yet the market returned 2,500% even if one spent ZERO MINUTES understanding investing?

Thought about in the right way, on a long-term basis, the market is always a BUYING OPPORTUNITY. It’s sometimes a very attractive one, while other times it’s less attractive, but it’s always a machine of WEALTH CREATION.

The only time one needs to pay attention to multiples, cycles, and valuations in CLOSE FASHION is when the time comes that they need EQUITIES TO BE FULLY-PRICED since they plan to liquidate and spend the sums on living expenses.

You won’t catch the ABSOLUTE BOTTOM 99% of the time, but remember the eternal wisdom of the chart above and of Peter Lynch, who said the upside is greater than the downside.

Even if you bought at the top of the NASDAQ bubble in the year 2000 and had to wait for 15 YEARS until the index got back to its previous high (THAT’S INSANE!), you’re still up 150%. 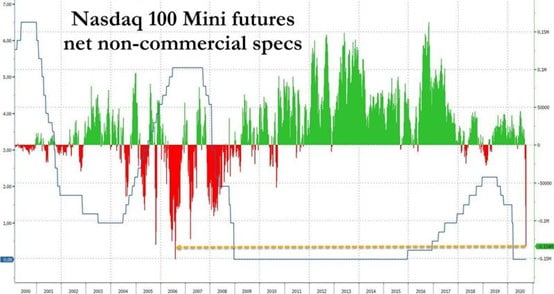 Throughout this SEPTEMBER CORRECTION, we’ve asked you to consider contrarianism as a philosophy.

You can see why above: the masses are JUMPING SHIP before the elections, but unless you need access to funds in the coming months (which means you shouldn’t even be trading), the indices are inviting you to BUY CHEAPER than before.

Cyclical industries are not included in this way of thinking since the key to those is to buy during BUSTS and sell during BOOMS.

Gold and silver mining stocks are the PERFECT EXAMPLE: 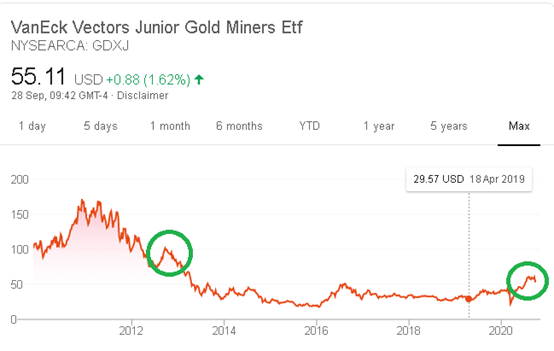 Literally, this is the birth of a BULL MARKET after seven years of sideways action; THE FUN is only beginning.

In my opinion, the GDXJ can return to triple-digit figures and it’s currently 55 points, so that’s NEARLY DOUBLE its current value.

Many forecast higher prices than in 2011; to me, that kind of BULLISH RALLY largely depends on the price of silver.

If silver can SURPASS $30/ounce between now and March 2021, it has a chance of going ALL THE WAY to $50/ounce, which would propel the GDXJ to new highs and your mining portfolio would beat JUST ABOUT anything else out there.