“Brain-Eating Amoeba” In The Water Supply! Is There Something Else Going On? 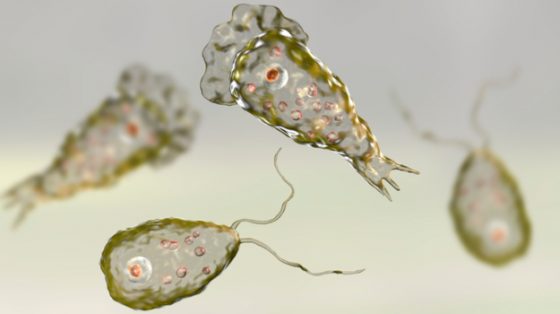 Two days ago we wrote about a “brain-eating amoeba” found in Lake Jackson, Texas drinking water. According to officials, the amoeba has killed a six-year-old boy, but there are issues with this news. Are we witnessing another psyop?

A “Brain-Eating” Amoeba Has Been Found In Texas Water Supply

Tests for naegleria fowleri showed its presence in three of 11 samples in the Lake Jackson area, including one from a hose at the boy’s home, according to the Associated Press. Texas Governor Greg Abbot referred to the water sample tests when he issued the disaster declaration on Sunday. He said, “the presence of naegleria fowleri, which can cause a rare and devastating infection of the brain called primary amebic meningoencephalitis, was identified in three of 11 tests of the water supply, posing an imminent threat to public health and safety, including loss of life,” as CBS News reported. –SHTFPlan

Initially, we had thought it strange that the Centers for Disease Control and Prevention says that the amoeba naegleria fowleri cannot enter the boy by being swallowed, it must come in through the nose. So why did Lake Jackson issue an order to not drink the water? Psyop or not, the breaking of this story warranted us to cover it. Is this the start of something big? If so, what are they getting us ready for?

Naegleria fowleri infects people when water containing the ameba enters the body through the nose. This typically occurs when people go swimming or diving in warm freshwater places, like lakes and rivers. The Naegleria fowleri ameba then travels up the nose to the brain where it destroys the brain tissue.

You cannot be infected with Naegleria fowleri by drinking contaminated water. –CDC.gov

Brian at the YouTube channel High Impact TV notes that it “looks like a pilot test for something different.” We couldn’t agree more.  Something isn’t right about this, so please pay attention.

Perhaps it’s a test to see how many will look beyond the surface and into what the amoeba can and cannot do. Perhaps it’s a cover for what is going to be put in the water, as Brian suggests in the above video. Who knows at this point.  But this story is strange. The boy who died, passed away on September 8, but this took almost 20 days or three weeks for people to be notified that there is a problem? There are so many strange things about this that it warrants watching.

For all intents and purposes, “it does look like a psychological operation,” said Brian.

The amoeba’s presence has prompted the city of Lake Jackson to purge the water supply for 60 days to attempt to remove the parasite. Governor Greg Abbott issued a disaster declaration on Sunday for Brazoria County in response to the discovery of the deadly parasite. “The state of Texas is taking swift action to respond to the situation and support the communities whose water systems have been impacted” by this amoeba, said a statement by the governor, according to a report by NBC News.

Please pay attention and stay alert.  Know what’s going on, because this could all roll into something much bigger.