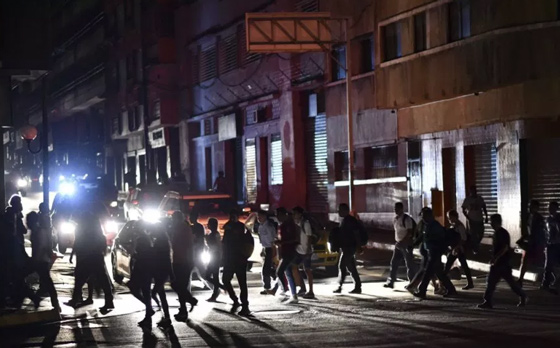 This article was originally published by J. G. Martinez D. at The Organic Prepper

I am devastated because of the news of these last few days. The reality is, the reason for the power grid country-wide failure is the corruption level of these last years. Our main electricity generation company is a state-owned one, and the budget for the maintenance was stolen.

The funds are now in some tax haven under the name of God knows whom.

Now, start with the real topic: how to deal with the consequences.

The blackout in Venezuela has no end in sight.

This extremely extended blackout is going to stay a long time. I have been sent reports of people charging 1$ to charge your cellphone 10 minutes. Go figure. I have seen pictures of a 5 kg ice bag being sold at 10$. This is not going to last too long. The military is going to jail those abusing their ice production capacity…not for “justice” but to take it over, for themselves. This is too easy to predict. And that is why living in a large city once things start to become hairy, stinks.

In Caracas, the capital, people are driving in the opposite direction in the highways, trying to locate a spot with cellphone signal to send messages via the internet. They are roaming desperately in the streets looking for drinking water, ice, medicines, or food.

The country became a concentration camp, courtesy of uncles Hugo, Fidel, Raul Castro, and Diaz Canel. If someone out there believes that Cuba Island should not be freed, let me know the reasons. They are responsible for all of this mess. Just look at the history: they tried to invade Venezuela in 1963 and then again in 1967. Changing the tactics, they introduced a mole in the army in 1974 – Hugo. This has been extensively documented by Ivan Carratu Molina, and he has been interviewed many times. I am sure he has published some of his work translated to English, explaining how they arrived to the chair to weld themselves into the power.

There is a terrifying scarcity of news after over 50 hours without any electricity.

I have not received messages from my family in the last 3 days. As they are in a very small town and have access to an underground stream and power generation, a fruit garden, and small cottage and farms all over the place I assume they are coping with the situation. My concern is for them to have access to gasoline and food, as the electronic payment has been severed with the blackout. However, they, being widely known in the town, should not have too many problems. I have tried to make phone calls to the landlines but they are disabled too.

The few notices I have received is that there are lootings in Caracas and surrounding areas. I can´t know how extended or severe this situation is. There is no one there with means to transmit what can be happening.

This is an ideal situation for the activation of a HAM based network information. Solar panels, a small battery to run the equipment, safely from a remote station, and we are set.

It is very likely that any station transmitting somehow sensitive information like looting places, dog-eat-dog shootings, gunfights, road blockages, and alike, could be targeted by the authorities, though. In our case, it is more about connecting people in other countries with their relatives inside.

The harsh reality of surviving a collapse is hitting people in Venezuela now.

I read in the social networks people that start to provide survival advice, with basic items, and newbie prepper stuff. I used to receive jokes and used to have coworkers laughing at me when they watched my house evolve and my gear. I just hope now that they don´t loot it while I am not there!

The food, scarce and extremely expensive, is getting spoiled after over 2 days without power. People are really starting to face, in a tropical climate with temperatures over 29 Centigrade (84 F), how hard it is to survive. The water pumping system is down, so people with tanks or gravity systems already have a backup…but without any power to fill the tank, the situation is going to become nasty.

Thank God the sewage system there is designed to work without any pumping.

One of my friends in our city has a solar panel, but he can´t find a battery at an affordable price. He earns a 5$ salary and the battery is 80$, cash. He won´t use the old battery of his truck because it won´t last, and it is beyond its natural life limit. He has a small genset, but can´t find oil for 2 stroke engines, again, at a price he can pay.

This should raise concerns to those living on a wage of a state company, all over the world. My dad has been able to deal with inflation because he is a freelancer, and he adjusts his price, sometimes even bargaining and getting food or goodies.

It is becoming harder for me to focus on writing. Being jobless in a foreign country, and without knowing anything about my parents is not something that helps. I apologize if this seems to be written a little erratically.

Being without power is making food preservation and cooking difficult.

OK now, let´s see. There is no power during the day, and the supply is 2 or 3 hours daily if that. No power means no water, in the cities, at least. The food in people´s fridge is rotting after 48 hours in the dark. Many of them reported this on social networks.

I don´t have a clue how many changed to electric kitchens because of the inability to find bottled propane. That´s almost impossible to know, but it must be an extremely large number. That worked fine…until now when we face a total power grid collapse. No one bothered in researching some alternative cooking means just like solar dishes or similar ways.

Many people have a grill, at least, and finding some firewood in a nearby park should not have been so hard, to prevent the food from rotting. Of course, some city people won´t want to damage their image collecting firewood. Darwin kicks in and hurts.

The worst part is that most of the apartments must be now dark, humid and hot caves. Not a place I would like to be these days. Outside, things can get really hairy in a heartbeat. Talking with my wife, while having some coffee, we realize how lucky we are, despite being both jobless and broken beyond belief. But we are still a family.

The reports I have been receiving are stuff like…a girl I met in the SSNN giving a ride to a granny with a stroke and her son to a private medical center…and they almost refused to attend her, because there was no place. They insisted until the doctors admitted her. The guard of the clinic approached the girls and told them to go home because an explosion was coming. The girl described extreme tension in the environment.

Being the capital city, the rest of the country already was struggling with some issues, and being punished as well by the gang. But nothing prepared the people of the capital to face this.

Carrying water bottles, 2 gallons each, by the stairs up to a 15th floor is not something that your average next door girl used to do every day. Paying dollars because no one wants some other currency is something that never was in the realm of the possibilities. I am proud to say, I saw that, especially that, coming in 2015 and told it to a friend of mine. Many of those early warning signs (I wrote about those signs, indeed, in one of the first articles) are now a cold and painful reality.

That said, I must recognize something. It was extremely expensive and difficult to stock a pantry when my wife and I started prepping circa 2008. Nevertheless, we did it. In the top of our preppings, we calculate two months for the 4 of us, without leaving home. Provided no power collapse, of course, and water supply was more or less constant, to fill up the tank.

This is very important, and have to be considered in any prepping plan made to survive long term: after our acquisition power started to vanish, working for a salary was NO LONGER VIABLE. Our pantry got a deep beating in less than the half of the calculated time, fellows!

I can´t explain if this was something atypical, or if this was to be expected in hyperinflation. There was no way to buy food after the hyperinflation process started to develop itself. We had to consume our stock, mainly because the rationing taking place made IMPOSSIBLE TO replenish. This is why I hate those…demons.

After a while, I was entirely relying on my other online job (working until 12 am often to wake up at 6 am for the day job) and exchanging a good portion of that salary to be able to buy most of our food. We invested in the improvement of our education (I don´t know to do anything else than my profession, and my only vocation perhaps is to talk a lot, besides writing of course). We saved some of the money, but plenty of that was for home improvements and food.

The very hard choice of our forced displacement had to be made, with me leaving early to try to set up something before bringing along my family (and I will always appreciate those who sent assistance those days for the tickets, and will be eternally thankful for that).

Please read a summary of the situation I have seen and my conclusions in the next article, in a couple of days.