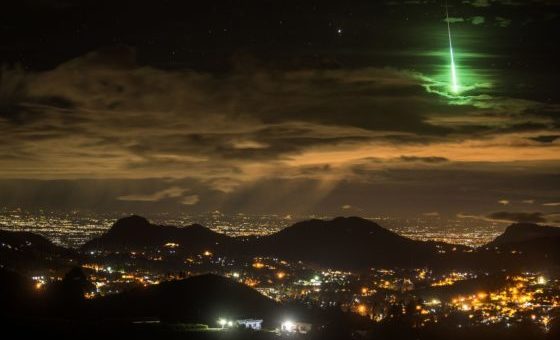 A fireball in the sky Sunday gave midwesterners quite the view when it created a brilliant and bizarre green light at night. The fireball was seen across several states including Iowa, Illinois, Minnesota, Indiana, Kansas, Nebraska, Ohio, Michigan, and Wisconsin.

“The estimated 3D trajectory computed from the witness reports shows a shallow entry angle, one that could be associated with an Earth-grazing fireball,” the AMS explained in a post online. “But many witnesses reported a fragmentation – it could mean the meteoroid actually went through the Earth atmosphere.”

“Airline crew here, we saw it pass from right to left (north to south) over Moline, IL. It left a brilliant green light, and shed lots of debris as it entered the atmosphere, exploding at the end,” one Twitter user explained.

Although the sight of the bright green light was odd, there is an explanation.  According to Forbes, Meteors are green because as a meteor enters Earth’s atmosphere, it is heated to the point where its outer layer is vaporized. The metals in the meteor glow with particular colors. Green comes from nickel. The most common metallic meteors are iron-nickel, so green is actually a rather common color. This glow tends to be the brightest when meteors hit the atmosphere at a high speed. For example, fast-moving Leonid meteors can often have a green glow.

But that certainly doesn’t detract from the ominous beauty of the green light, as many social media users detailed.

“Anyone just see the Big Green fireball fly thru the sky!?????? Just flew over me as I was passing Mahoney St Park. THAT THING WAS BOOKING IT!!!!!” one Twitter user exclaimed. “I also saw the green shooting star / fireball in Saint Paul. Definitely a meteorite,” another user added.

“Because of their appearance, these streaks of light some people call meteors ‘shooting stars,'” NASA explains in a blog post online. “But scientists know that meteors are not stars at all — they are just bits of rock!”

According to Fox News, a meteor forms when a meteoroid, which is a type of space rock that breaks off from a rocky body orbiting the sun (an asteroid) enters Earth’s atmosphere. As soon as the space debris crosses over, it breaks down into what scientists call a “meteor,” which then vaporizes and, as a result of friction, appears as a bright streak of light in the sky.