As we head into day three of counting the ballots, Philadelphia City Commissioner Al Schmidt told CNN he expects an update in the next few hours as they kept counting through the night.

There are 50,000 votes left to be counted there, he said. Despite a dustup that was the result of observers from both the Trump and Biden campaigns have been present observing the counting process, Schmidt said. “We have no doubt when the count is finished, Senator Harris and I will be declared the winners” he added.

Here’s the most up to date map from Bloomberg: 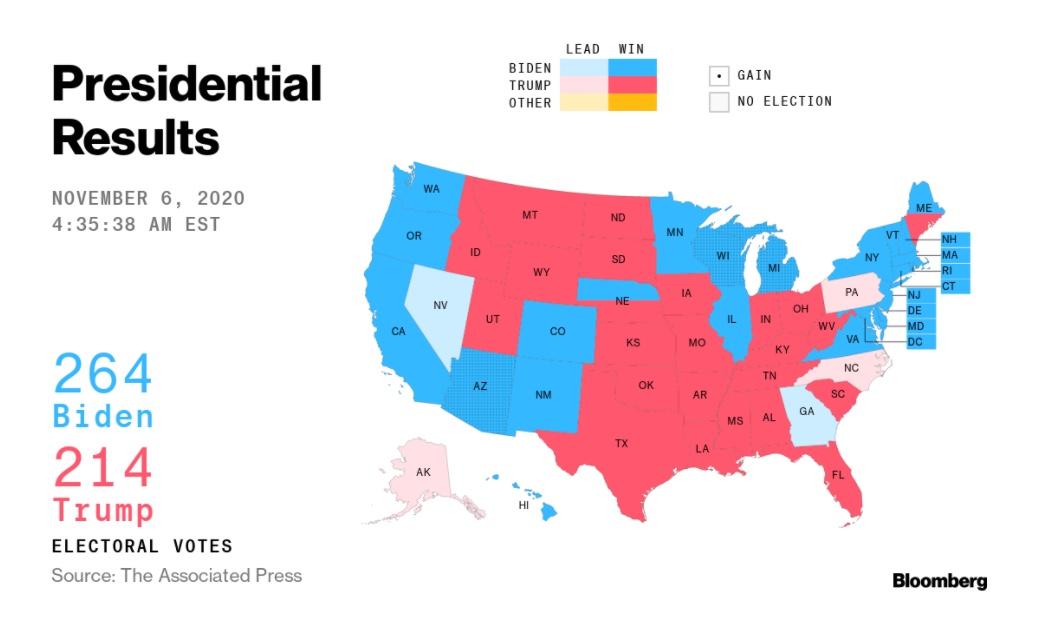 In Georgia, Biden took a lead of more than 900 votes at about 0430 Friday morning: the lead has since grown to 1,096 votes. He gained the lead initially came after Clayton County in the Atlanta suburbs reported a bucket of ballots. Biden had been winning a huge proportion of the votes in that area. Other Atlanta suburbs are still reporting.

In PA, Trump’s lead stood at 18,229 votes at 0600ET though it seems to steadily be shrinking. More mailed-in ballots, which Biden is winning by a healthy margin, are still expected to be counted, with many of them from the heavily Democratic city of Philadelphia and its suburbs. More mailed-in ballots are also set to be counted on Friday in Allegheny County, the home of Pittsburgh.

However, in Georgia, a local reporter summed up the situation with all the attendant frustration and vitriol. Robin Kemp, the reporter in Clayton County, acknowledged that “yes” the votes are still being counted” and that no clear winner has emerged.

If, by some miracle, Biden does pull off a victory in Georgia, it would be a historic moment for Dems. But it wouldn’t necessarily translate to a victory: Also, for readers who aren’t familiar with the other votes that take days to fully count these are validly cast ballots, just being counted now.

Biden also retains leads in the states of Nevada and Arizona, where ballots are still being counted, and mail-in ballots from thousands of older retirees remain to be counted.

With PA remaining the biggest available prize, every major network has Biden leading with at least 253 electoral votes, meaning that if he were to win Pennsylvania and its 20 electoral votes, he would have more than the 270 electoral votes needed to win the presidency. Fox News and the Associated Press have both called the race for Biden in Arizona, projecting him as the winner of that state’s 11 electoral votes, though other networks have abstained.