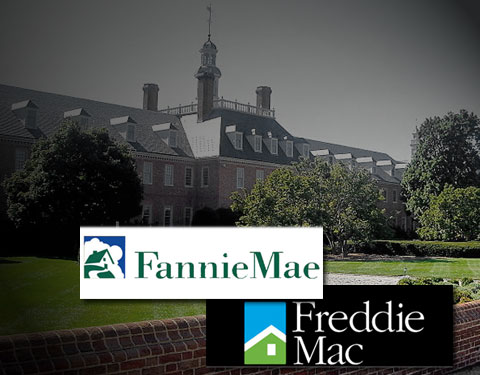 There is trouble again for federal mortgage backers and bailout queens Fannie Mae and Freddie Mac, whose failures helped to trigger the housing market collapse and subsequent 2008 economic crisis.

The government enterprises are again turning their lowest profits since the recovery, thanks to derivatives losses – where most of the mortgage lender money is invested:

Fannie Mae will make its smallest payment to taxpayers in more than four years after large derivatives losses crimped its fourth-quarter profit, the government-controlled mortgage financier said on Friday.

Fannie Mae said a drop in long-term interest rates sharply reduced the value of the derivatives contracts it uses as hedges in financial markets, adding that low capital buffers are raising the risk it could need taxpayer money in the future.

The derivatives losses helped reduce quarterly profit to $1.3 billion, about 80 percent less than a year earlier, and the $1.9 billion check that Fannie Mae will cut for the Treasury in March will be the smallest since the second quarter of 2010.

Regulators are concerned that the problems leading up to the previous housing crisis are being repeated. Former Federal Housing Finance Agency director Ed DeMarco said:

“In the past year or so we’ve actually seen a renewed policy focus on questions regarding access to credit, which can risk repeating the approach that contributed to the financial crisis—that being the government’s rather vigorous concern about expanding access to credit. That’s not to blame the conservator, whoever it is, it is pointing out the consequence of having a lack of legislative action and having these two companies continuing to operate in conservatorship.”

Behind the scenes, losses are being socialized, while profits are being privatized as usual.

With growing perils, Fannie and Freddie are again looking towards a possible bailout, and the likelihood of a short term Treasury infusion of cash. Reuters reported:

“Future profitability is far from assured,” Federal Housing Finance Agency Office of Inspector General said in a report, pointing out that the firms could again chalk up losses on their derivatives portfolios, similar to those they reported in the fourth quarter.

“(This) increases the likelihood of additional Treasury investment,” the report stated.

Exactly how much the bill will be is not yet clear.

Last time there was a bailout, taxpayers were on the hook for nearly $200 billion, with some $116 billion directed into Fannie Mae and another $71.3 billion injected into Freddie Mac. Those amounts have since been repaid, but the larger problems have hardly been averted.

The reconfiguration of rules for managing Fannie and Freddie since 2008 have kept it from maintaining any significant cash reserves, and in turn put investors money in the hands of derivatives – illusive vehicles indeed, here today, gone tomorrow. Leaving a big, black hole.

Investment Research Dynamics pointed out the inherent fraud in the system, again, set up to fail and burden the lowly and powerless taxpayer:

Similar to when Fannie was plugged full of derivatives under former CEO Franklin Raines … the Government has once again looked the other way while Wall Street unloaded another avalanche of derivatives onto FNM/FRE.   Once again the Taxpayers will pay for this.

This is not a ‘warning” – this is a “get ready here it comes” statement.   The fact is that most of FNM/FRE’s “profitablity” has been driven by the same fraudulent “mark to model” accounting that has generated most the big bank profits since 2009.

And the Government used this fraudulent accounting to suck money out of FNM/FRE.   The “improved” balance sheet has enabled both FNM/FRE to issue debt to investors.  The money raised has been used reload their mortgage holdings and for dividend “payback” payments to the Treasury.

Things are teetering, teetering, close to the edge, and ready to collapse into another round of chaos… anytime now, I guess.

A more interesting question would be: who is quietly profiting from its brewing trouble?