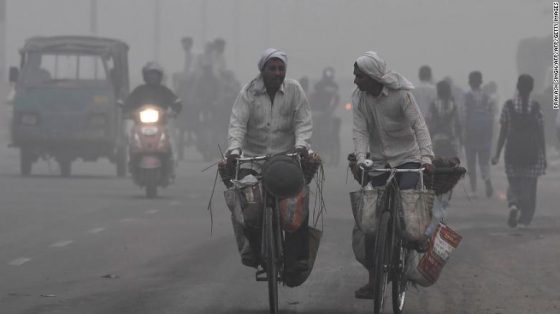 Residents of the heavily populated city of New Delhi, India have had to tie scarves across their faces in an effort to breathe more easily.  The heavy smog in the city is entering day three, and a state of emergency could soon be declared to protect the health of the people who reside there.

Air quality readings in India’s capital have soared since Tuesday, with one monitor showing levels in the city were 969. To put that in perspective, the World Health Organization considers anything above 25 to be unsafe. Those levels are based on the concentration of fine particulate matter, or PM 2.5, per cubic meter. The microscopic particles, which are smaller than 2.5 micrometers in diameter, are considered particularly harmful because they are small enough to lodge deep into the lungs and pass into other organs, causing serious health risks.

The wider Delhi-National Capital Region (NCR) is a sprawling area that encompasses Delhi, as well as satellite districts in the neighboring states of Haryana, Uttar Pradesh, and Rajasthan, and is home to some 46 million people  The area lacks effective public transportation and workers must drive their own cars to and from jobs in the city, which CNN says further exacerbates the problem.

According to CNN, The Delhi government is being urged to declare a city-wide health emergency, as residents endured a third straight day of heavy pollution. But apparently, this happens every year, according to one Twitter user, who blames the smog on crop burning.

Delhi has become a gas chamber. Every year this happens during this part of year. We have to find a soln to crop burning in adjoining states

Every year, farmers across fertile neighboring states set fire to their fields to clear them for the next season. Known as stubble burning, millions of tons of crop residue are set alight releasing untold amounts of particulate matter into the environment.

Politicians and government officials are also blaming farmers in neighboring northern Indian states who clear their fields by burning their crops. The landlocked capital sits in a natural bowl and is surrounded by industrial and agricultural hubs. Without the coastal breeze of cities such as Mumbai and Chennai, much of the pollution settles.

But crop burning is not the only problem India faces with regards to their pollution problem.  Delhi’s pollution also comes from industrial emissions, vehicle exhaust from cars, road dust, and the burning of biomass, said Santosh Harish, assistant director of research at EPIC India, a research institute based in the US and India.

A report by the Indian Institute of Technology Kanpur carried out in 2014 found that vehicle omissions accounted for 20% of Delhi’s annual PM2.5 levels and combating that pollution will be a difficult task because the number of cars on the city’s roads has continued to rise. According to government statistics, the total number of vehicles in Delhi exceeded 10 million for the first time in 2016.

Should New Delhi fail to reign in their pollution, the health of 46 million is on the line.