An Unlikely American Hero Has Emerged in the Face of Hurricane Florence: Waffle House 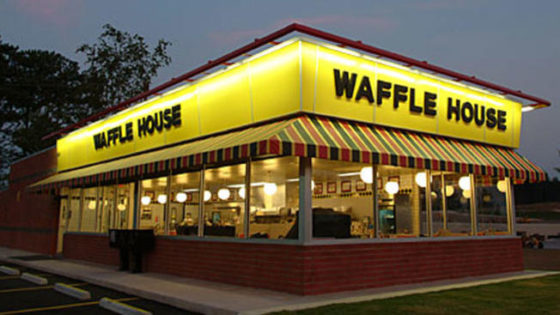 FEMA isn’t exactly known for its competence or efficiency, but as Hurricane Florence looms over the Carolinas and southern Virginia, an unlikely ally is providing support and guidance.

The popular restaurant chain Waffle House has a reputation for staying open all hours of the day, every day, even during hurricanes. In fact, a common reference point for how bad a hurricane has gotten comes in the form of whether the Waffle Houses in the area are open. “When Waffle House surrenders to a hurricane, you know it’s bad,” read one Miami Herald headline in 2016.

“If you get there and the Waffle House is closed? That’s really bad. That’s where you go to work,” a FEMA employee told the outlet.

Even in harsh hurricane conditions, Waffle House will offer a limited menu with items that don’t require power, water, and gas to prepare. The restaurant usually won’t shut down unless it’s physically destroyed.

This tenacity led FEMA to create an index to gauge the severity of hurricanes and their damages using Waffle House as a barometer. In 2004, amid Hurricane Charley, then-FEMA administrator W. Craig Fugate, Florida state meteorologist Ben Nelson, and member of the National Guard were assessing the damage and attempting to find a place to eat.

As FiveThirtyEight detailed in 2016:

“‘They went to a Waffle House and noticed they had a limited menu, with nonperishable items,’ Alexa Lopez, FEMA’s press secretary, told me. ‘The next day, they were driving around and they went to a different Waffle House, and the same thing happened, a limited menu.’“So, she said, the group was inspired first to rank Waffle Houses in the same way: green for fully operational, yellow for a limited menu and red for closed. ‘Which is pretty bad, because Waffle House is always open,’ Lopez added. And, second, to use those observations as a proxy for how much a disaster disrupts a community.”

The so-called Waffle House Index also serves as an “indicator of how complex and long supply chains are — for food, for fuel, for power — and of what it takes to plan around infrastructure that can be fragile in unexpected ways.”

Though it’s not an official index, Waffle House does inform FEMA of its closures and shares wind speeds, power outages, and other measures.

Waffle House also has a “Storm Center,” where they monitor the development and impact of hurricanes.

The ⁦@WaffleHouse⁩ Storm Center is activated and monitoring #Florence. Plan ahead and be safe. pic.twitter.com/UOBi5oZRRi

They are currently monitoring Hurricane Florence, which has already prompted evacuation advisories for over a million residents and caused thousands of power outages, Though the storm was previously designated a Category 4, it is currently classified as a Category 2. (SHTFplan.com editor’s note – storm conditions have changed since this article was originally published on Anti-Media.)