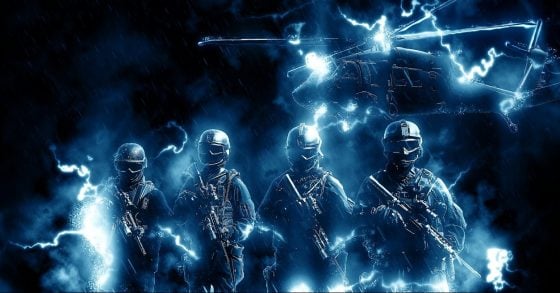 It appears that the U.S. military is taking this coronavirus outbreak extremely seriously.  An executive order has been issued which has initiated the implementation of “the Department of Defense Global Campaign plan for Pandemic Influenza and Infectious Diseases 3551-13”.

We don’t know all of the details of the plan, but we do know that it instructs U.S. military officials “to prepare for widespread outbreaks”.  Many in the mainstream media continue to try to convince us that this virus is not much more dangerous than the common flu, but if that is true then why is our military taking such a dramatic step?  The following comes from a Military Times article…

An executive order issued by the Joint Staff and approved by Defense Secretary Mark Esper this month directed Northern Command and geographic combatant commanders to initiate pandemic plans, which include ordering commanders to prepare for widespread outbreaks and confining service members with a history of travel to China.

For now, we are not being told the specific details of this plan, and when Northern Command was asked about it they issued a very vague statement…

“We coordinate with other combatant commands to assess potential impacts in the event of a pandemic and we ensure the U.S. military is poised to respond as required,” said Northern Command in a statement emailed to Military Times. “The military profession fosters a culture of planning, and the fact that we are coordinating planning efforts across the geographical combatant commands is consistent with how we prepare to respond, if directed.”

Thankfully, the virus is not spreading widely inside the United States so far.

But that could change at any time, and on Wednesday a 14th U.S. case was confirmed…

A second person evacuated from Wuhan, China, to a U.S. Marine base near San Diego has been diagnosed with the new coronavirus, raising the tally of confirmed cases in the United States to 14, the Centers for Disease Control and Prevention (CDC) reported on Wednesday.

The patient was among 232 individuals who had been placed under quarantine at the Marine Corps Air Station Miramar after being airlifted from the epicenter of the coronavirus outbreak in Wuhan earlier this month, CDC spokeswoman Ana Toro said.

We should be thankful for the low number of cases in this country, but Dr. Nancy Messonnier is warning that “we are likely to see community spread in the U.S.” at some point…

Top health officials prepped Americans for the prospect of novel coronavirus spreading in communities in the United States during a Wednesday news conference.

“At some point, we we are likely to see community spread in the U.S.,” said Dr. Nancy Messonnier, director of the National Center for Immunization and Respiratory Diseases.

And if we do start seeing tens of thousands of confirmed cases here, the level of fear is going to rise dramatically and a lot of people are going to go completely nuts.

In fact, we are already starting to see some really strange things.

For example, a couple of “pranksters” in New York thought it would be really funny to spill a bucket of “coronavirus” in the middle of a crowded subway car…

David Flores and Morris Cordewell donned hazmats suits for the stunt while holding a container filled with liquid that had biological hazard markings on it.

In the video Cordewell gets up and spills the liquid over the floor as train passengers quickly jump out of harm’s way. However, it turns out their bucket contained Kool-Aid juice.

Yes, they probably thought that it was quite funny, but the truth is that this sort of a stunt could have taken a very tragic turn.

Over in China, we are witnessing things that are even more frightening.

For example, one woman that has apparently caught the virus decided to walk down the street in the middle of the day and touch every car door handle she came across.

In other words, it appears that she was purposely trying to spread the virus to others.

When things get really nuts, most people will behave at least somewhat rationally, but there will always be others that will completely snap.

And without a doubt, there are always crazy people that are trying to bring unusual things into this country.  For instance, just check out this recent example from Zero Hedge…

That’s exactly what happened two weeks ago: U.S. Customs and Border Patrol, in the midst of the coronavirus outbreak, seized a bag of dead birds that was being carried in the luggage of an airline passenger traveling from China to Washington D.C. on January 27.

The birds were packaged in a bag that had cartoon images on it and was seized at Dulles Airport from a passenger, who was arriving from Beijing, according to the NY Post. The passenger claimed that the birds were “cat food” and that he was planning to bring them to Maryland after his flight.

Our world is getting crazier with each passing day, and it is inevitable that we will see a lot more weird stuff happen in the months ahead.

We are in a battle with a virus that is perfect for spreading fear.  It is invisible to the naked eye, it can survive on surfaces for up to 9 days, it has an incubation period of up to 24 days, and it spreads from person to person frighteningly easily.

To a certain extent, there is comfort in being able to see your enemy.

But we cannot detect this virus with our five senses.  It could be on the next grocery cart you push, the next door handle you twist or the next hand that you shake.

That sort of uncertainty is going to drive a lot of people crazy if this virus starts spreading widely inside the United States, and so let us hope that such a scenario does not become a reality.