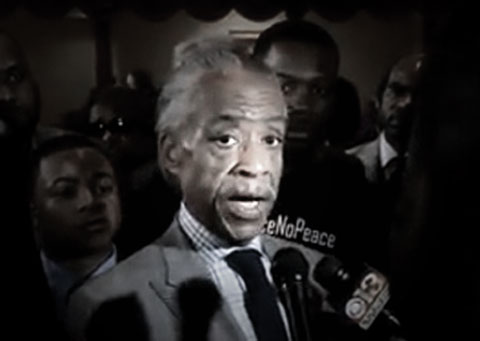 It’s about federal power over policing in America.

That agenda, which SHTF reported on back in December, is made plain by the latest from the Rev. Al Sharpton.

His march on Washington isn’t just an attempt to stir up sympathy points in a divided political landscape. By his own words, Sharpton is trying to use the issue to fight states’ rights and have the Justice Department intervene at the federal level with local police affairs:

“We need the Justice Department to step in and take over policing in this country. In the 20th Century, we had to fight states’ rights to get the right to vote, and we got to fight states’ rights in terms of closing down police cases. Police must be held accountable. I don’t think all police are bad; I don’t even think most are bad; but those that are need to be held accountable.”

In his cynical, opportunistic way, Sharpton is a attempting to recreate the civil rights movement of the 60s, with all the trappings a politically-corrected generation that swarms on Twitter before it gathers on the streets.

How far will things go? Many believe the ultimate goal is to use the strings of federal funding and the threat of civil rights lawsuits to essentially create a national police unit that would trump local and state powers. Does justice spring from that process? The question may be too late.

Violence of police abuse has predictably surfaced once again in Baltimore, with the vast majority Americans (in polls) expecting more violence to spread in inner cities across America in the coming weeks. It could be a long, hot summer.

As the Baltimore Sun reported, Mayor Stephanie Rawlings-Blake, who controversially called for “space” for those who wished to destroy, is in lock-step with Sharpton’s federal agenda:

The mayor promised that “we will get justice for Freddie Gray” and defended the steps she has taken to reform Baltimore’s policing practices. Rawlings-Blake noted that even before Gray’s arrest April 12 she had asked the U.S. Department of Justice to investigate the Baltimore Police Department, saying that was the strongest action she could take short of entering into a consent decree.

“Nobody wants the Department of Justice to come in and take over our city,” she said.

Nobody, that is, but those involved in President Obama’s racially-themed fourth quarter politics.

From Michael Brown in Ferguson, to Trayvon Martin in Florida, Eric Garner in New York and now Freddie Gray in Baltimore, the usual suspects have been working hard not only to link police abuse with race, but to patch it into a larger civil rights case spanning nationwide that requires federal action over local police matters.

Via Twitter, the ACLU declared that the ‘Black Spring has begun’ and urged cooperation with the Justice Department in efforts to collect data on deaths and abuse in police hands. It references the Arab Spring, in which grassroots uprising ultimately gave way to military dictatorship, at least in Egypt.

We need to reform policing. Better data is a good start. Tell @TheJusticeDept now is the time https://t.co/SlTuNkVG1p pic.twitter.com/leFGSZt3U1

Then-Attorney General Eric Holder filed a civil rights inquiry in the matters pertaining to Eric Garner, just days after violence erupted as a result of a grand jury decision not to indict the officer who shot Michael Brown in Ferguson. The BBC reported:

Announcing “an independent, thorough, fair and expeditious” investigation into potential civil rights violations in the chokehold case, Mr Holder said he was continuing a review of how to heal a “breakdown in trust” between police and communities.

The justice department, he said, would conduct a “complete review” of material gathered in the local investigation. “All lives must be valued – all lives,” he added.

Even though America has a black president and a black attorney general, Eric Holder, this will reinforce the widespread feeling in poor African-American communities that the criminal justice system is weighted against them, and that the law is not colour-blind.

As SHTF pointed out last time, the wave of attempts to improve police-community relations during the Clinton years inadvertently fueled the rise of hyper-policing that has put more people per capita behind bars in America than anywhere else in the world, and with it a higher percentage of black men than any other group.

Reuters just published a report warning of the “unintended consequences” of the Justice Department “fixing” what is wrong with Ferguson and the other cases.

While arguing that the federal government “can and should” influence changes in criminal justice policy, Reuters also points out the drastic damage that has already been done:

One piece of federal legislation, the 1994 crime bill, has played a pivotal role in the incarceration epidemic. The law, which was designed to reduce crime, gave states $9 billion to pass laws that would increase time spent behind bars.

The result, however, was an explosion in state prison populations that has made the United States the world’s largest jailor. The United States has 5 percent of the world’s population, but 25 percent of its prisoners. This has immense fiscal, economic and social consequences — each prisoner costs taxpayers, on average, $30,000 a year, and inmates with criminal records, even for minor offenses, face significant challenges re-entering society. The racial disparities are also vast. One in three black men can expect to spend time behind bars.

Today, the federal government annually sends states and cities more than $4 billion… What the federal government chooses to fund, however, creates incentives for local police. For example, Washington’s funding priorities have supported mass incarceration by concentrating on the number of arrests and seizures police make, rather than tabulating the number of offenders diverted to mental health or drug treatment programs.

However odious the actions of the local and state authorities, beware the consequences of the federal government’s solution.