A New Thermal Area Was Discovered Under Yellowstone 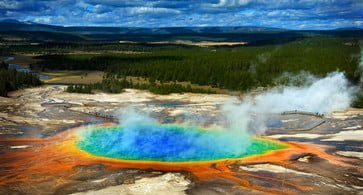 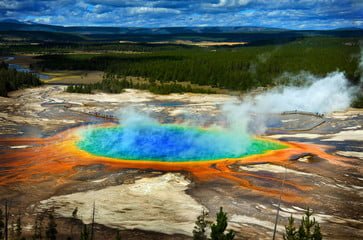 A new thermal area was discovered under Yellowstone National Park, nestled in beautiful Wyoming.  But scientists are adamant this time that there is no “impending eruption” because they found another area of thermal activity near the caldera.

Although scientists say that this new thermal area is just simply, a normal part of Yellowstone’s dynamic hydrothermal activity, the area has been slowly forming over the past two decades.  Not only that, but it was just recently spotted using infrared images of the existing Tern Lake thermal area. Obviously trying to quell the amount of talk about a supervolcano eruption, scientists insist there is no eruption coming to Yellowstone.

According to a report by Weather.com, the new area is entrenched deep in Yellowstone’s backcountry between West Tern Lake and the previously mapped Tern Lake thermal area. The U.S. Geological Survey confirmed the thermal area’s location earlier this month while downplaying any potential for an eruption.  “This is exactly the sort of behavior we expect from Yellowstone’s dynamic hydrothermal activity,” R. Greg Vaughan, a research scientist with USGS, wrote in a blog post, “and it highlights that changes are always taking place, sometimes in remote and generally inaccessible areas of the park.”

But Yellowstone will erupt at some point, and scientists have previously said we will have very little warning it finally does blow.

The serene nature of Yellowstone is also one of volcanic activity. Yellowstone has about 10,000 thermal areas concentrated into about 120 distinct areas. The USGS says that a “thermal area” is an area in which magma activity is concentrated underground. These areas can include geysers, like Yellowstone’s Old Faithful; hot springs; and fumaroles, which are vents that allow volcanic gases to escape. They are surrounded by hydrothermal mineral deposits, geothermal gas emissions, heated ground and lack of vegetation, the USGS added.

“Yellowstone’s thermal areas are the surface expression of the deeper magmatic system, and they are always changing,” Vaughn wrote. “They heat up, they cool down, and they can move around.” And Yellowstone has undergone some changes as of late, such as the eruption of Ear Spring, and the newly active Steamboat Geyser.

Even though a portion of these eruptions, earthquakes, and new thermal activity can be classified as normal, Yellowstone has a long a violent history showing those even mildly concerned about an eruption could be on the right track. But scientists are sticking to their guns and saying there is “no way” Yellowstone is going to erupt.

“We’ve heard many statements that Yellowstone is overdue — that it has a major eruption every 600,000 years on average, and since the last eruption was 631,000 years ago… well… you can see where this is going,” Michael Poland, scientist-in-charge of the Yellowstone Volcano Observatory, recently wrote in a blog post. “Is this true? In a word, no. In two words, no way. In three words, not even close. Yellowstone doesn’t work that way.”