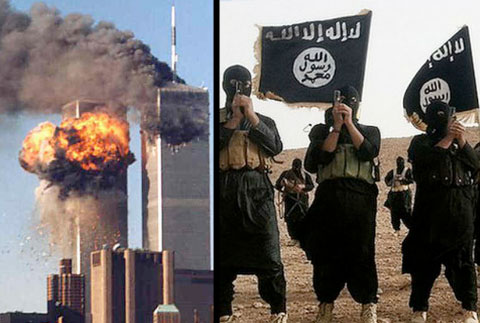 This article was written by Dr. Paul Craig Roberts and originally published at his Institute for Political Economy.

Editor’s Comment: The questions of 9/11 Truth have gained traction over the years, but few have thoroughly connected it to the maddening policies in the Middle East. The same reasons that the neocons were so eager to bring war to Iraq, Afghanistan and the Middle East during the Bush years are part and parcel of the same reason that coups and revolutions were supported in Egypt, Libya and Syria. As refugees now flood Europe and grab headlines, the same underlying problem is behind it all.

Terrorist organizations, including al Qaeda and ISIS, have made Americans fearful and compliant, while giving military forces a ready excuse to dismantle and destroy the mid-east region, and attempt to corner the enemies and rivals to Saudi Arabia and Israel. Their vision, built on a lie, has been to remake the Middle East in a new world order vision. Why are we allowing these policies to take root, and why have people still not overcome the 9/11 fairytale that keeps us under their thumb?

Millions of refugees from Washington’s wars are currently over-running Europe. Washington’s 14-year and ongoing slaughter of Muslims and destruction of their countries are war crimes for which the US government’s official 9/11 conspiracy theory was the catalyst. Factual evidence and science do not support Washington’s conspiracy theory. The 9/11 Commission did not conduct an investigation. It was not permitted to investigate. The Commission sat and listened to the government’s story and wrote it down. Afterwards, the chairman and cochairman of the Commission said that the Commission “was set up to fail.”

For a factual explanation of 9/11, watch this film:

Here is a presentation by Pilots For 9/11 Truth: https://www.youtube.com/watch?v=-Laaq44SDgg

Here is an extensive examination of many of the aspects of 9/11: http://www.luogocomune.net/site/modules/sections/index.php?op=viewarticle&artid=167

Directed by a beardy-guy from a cave in Afghanistan, nineteen hard-drinking, coke-snorting, devout Muslims enjoy lap dances before their mission to meet Allah.   Using nothing more than craft knifes, they overpower cabin crew, passengers and pilots on four planes.

And hangover or not, they manage to give the world’s most sophisticated air defence system the slip.

Unfazed by leaving their “How to Fly a Passenger Jet” guide in the car at the airport, they master the controls in no-time and score direct hits on two towers, causing THREE to collapse completely.

The laws of physics fail, and the world watches in awe as asymmetrical damage and scattered low temperature fires cause steel-framed buildings to collapse symmetrically through their own mass at free-fall speed, for the first time in history.

Despite their dastardly cunning and superb planning, they give their identity away by using explosion-proof passports, which survive the destruction of steel and concrete and fall to the ground where they are quickly discovered lying on top of the mass of debris.

Hani Hanjour, having previously flunked Cessna flying school, gets carried away with all the success of the day and suddenly finds incredible abilities behind the controls of a jet airliner.   Instead of flying straight down into the large roof area of the Pentagon, he decides to show off a little.   Executing an incredible 270 degree downward spiral, he levels off to hit the low facade of the Pentagon.  Without ruining the nicely mowed lawn and at a speed just too fast to capture on video.

In the skies above Pennsylvania

Desperate to talk to loved ones before their death, some passengers use sheer willpower to connect mobile calls that would not be possible until several years later.

And following a heroic attempt by some to retake control of Flight 93, the airliner crashes into a Pennsylvania field leaving no trace of engines, fuselage or occupants except for the standard issue Muslim terrorist bandana.

President Bush continues to read “My Pet Goat” to a class of primary school children.

The Neoconservatives are overjoyed by the arrival of the “New Pearl Harbor,” the necessary catalyst for launching their pre-planned wars.

This article was written by Dr. Paul Craig Roberts and originally published at his Institute for Political Economy website, which is currently seeking donations and financial support.

Dr. Paul Craig Roberts was Assistant Secretary of the Treasury for Economic Policy and associate editor of the Wall Street Journal. He was columnist for Business Week, Scripps Howard News Service, and Creators Syndicate. He has had many university appointments. His internet columns have attracted a worldwide following. Roberts’ latest books are The Failure of Laissez Faire Capitalism and Economic Dissolution of the West and How America Was Lost.