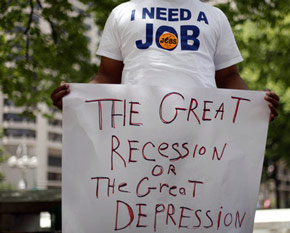 If you’ve been paying attention to the news lately, you probably noticed that the economy is making some scary moves. The stock market has been absolutely pummeled, in what is being called the worst start to a year in American history. Trillions of dollars in wealthhave evaporated already. Walmart is closing hundreds of stores, Puerto Rico is facingeconomic collapse, and global shipping is dead in the water. And to top it all off, only a select few regions in the United States have managed to recover from the last economic crisis.

It’s safe to say that we’re about to plunge head first into another recession. And it’s about time, because recessions tend to happen every 7-8 years, so we’re a bit overdue. If you haven’t already, now is the time to start bracing yourself for this eventuality. It’s just like any other disaster. If you prepare yourself ahead of time, you stand a better chance of staying above water when everything goes to hell.

One of the many ways you can position yourself to survive and succeed before an economic calamity, is to consider what skills will be in demand when money is tight across the board. I’m not talking about a total financial collapse and the breakdown of society, where suddenly blacksmiths and cobblers are in high demand. You just have to ask yourself, which jobs are going to be available during a recession, or even a prolonged economic depression?

Given past trends, I’ve selected 7 industries that I believe are going to experience either growth or stability in the next recession. It is by no means a complete list, so feel free to share your own job ideas in the comments below.

Specifically, truck drivers. Just because the economy slows down, doesn’t mean businesses won’t stop needing things delivered to their stores. Granted, fewer goods will be delivered during a recession, but there is and has been a really high demand for truck drivers in the United States, in both good times and bad. That’s because it’s not a desirable job, and there is an unbelievably high turnover rate. That employee turnover rate often increases during a recession because wages will drop, meaning there will be even more available jobs. It’s not pleasant work, but a job is a job and this line of work can put food on the table when times are tough.

However, it may not be wise to turn this into a long-term career. It’s very possible that self-driving cars will start taking over the roads in the near future, and automated semi trucks are already in the works. This line of work should still be available by the time the next recession arrives in another 8 years, but after that, all bets are off. Alternatively UPS/Fedex/DHL delivery jobs should be around for a while, though it’s hard to say when the act of delivering a package will be automated as well.

Anything related to renewable energy will likely continue to experience growth during a recession, for the simple fact that governments, companies, and individuals all want to save money. While there are several different kinds of renewable energy such as wind, biomass, geothermal etc, solar has been leading the pack for some time now and will continue to do so for the foreseeable future. Regardless of whether it’s the manufacture, transportation, marketing, or installation of solar panels and accessories, you can expect growth in this field during a recession.

Keep in mind though, that during a recession the most significant business growth in this field will be seen in commercial and government projects, rather than residential installations. While solar panels undoubtedly save money, they also have heavy up-front costs that will be easier for large organizations to afford. The same goes for other forms of renewable energy.

It doesn’t really matter what business you work for, or even if you work for yourself, most things don’t sell themselves. And in a recession, the ability to convince other people to buy a product or service suddenly becomes a much more valuable skill. It could be a sales, merchandising, advertising, or copywriting position. If you have a knack for closing a deal or enticing new customers, you should do well in any company, or any economic climate.

It’s no secret that crime rates often go up when the economy falls apart. To be fair, burglaries, murders, and robberies didn’t go up in the US during the last recession, but that usually isn’t the case. When you look throughout history, in any place in the world, you’ll usually find that all sorts of crimes become more frequent when there is less money to go around. If the crisis is so bad that otherwise successful people fail to earn enough money to feed and house themselves and their families, you can expect to see more crimes in your neighborhood.

On top of that, recessions often lead to fewer tax dollars in the coffers of the government, which means there won’t be as many police officers on the streets. Small businesses, corporations, gated communities, and even governments, will start to outsource their security needs to the private sector. Security guards are in high demand during recessions, and it doesn’t typically require very much training to enter this field. Almost anyone without a criminal record can find a job as a security guard.

And you can expect growth in this sector even during good times. The truth is, most cities in America have massive financial liabilities related to the pensions of their police forces, and they may not be able to afford them in the future. At some point within the next 20 years, you can expect to see massive police layoffs, followed by an abundance of opportunities in the private security sector.

Pretty much every job in the medical field is expected to see double-digit growth over the next decade. Granted, people avoid most non life threatening medical procedures when the economy is bad (especially dental procedures), but growth will continue in this sector regardless of the economic climate. We live in a pretty unhealthy society, which combined with our rapidly aging population, means business will be booming for a long time.

And you don’t necessarily need to be a doctor or a nurse to take advantage of it. There are plenty of jobs in the medical field that don’t require a 4 or 8 year college degree. There are EMTs, surgical technologists, phlebotomists, lab assistants, and physical therapy aides. Even security guards and janitors can make above average wages compared to their peers, in a hospital setting.

During a recession, you obviously want a job that pertains to an industry that people simply can’t do without. Food certainly falls under that category. However, you don’t want a job related to industrial farming. That employment field has consistently shrunk over the years due to automation. The production of organic food is where it’s really at.

Whether it’s growing organic food, shipping it, marketing it, or selling it, that’s the food industry you want to be in. Organic food sales have increased year after year since 2000. There was a slowdown in sales during the last recession, but growth in that industry continued nonetheless. More and more people are seeing the benefits in eating healthier food, and many of them are willing to pay more for it, even when they don’t have as much money. Which makes sense, because who are we kidding, what good is money when you’re too sick to earn it and too frail to enjoy it?

I hate to suggest this since it’s a rather unsavory business, but our vices are real moneymakers in hard times. However, not all vices are created equal. The gambling industry for instance, took a huge hit after the last recession. Tobacco sales often take a hit as well.  The vices that do thrive in bad times, are the little things. Alcohol and junk food do particularly well. The demand for Marijuana often increases as well which, considering how many states have been legalizing that drug lately, it may be a very lucrative trade to be involved in during a recession.