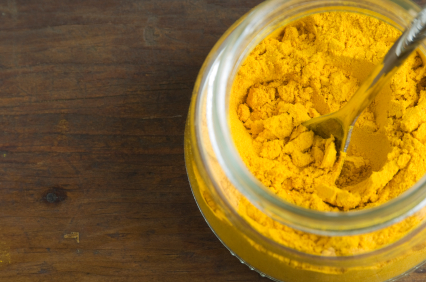 Turmeric seems like it just popped into existence within the past few years, however, it is widely used as a spice in both Asia and the Middle East. It also has some proven health benefits that make it an effective supplement.

Many Indian dishes use a heavy dose of curry, which is also recognizable by its distinctive, bright golden yellow color. The main ingredient in curry is the powdered form of the turmeric plant, (which can also be used as a dye) and that’s how the spice obtains that lovely golden yellow. Turmeric (Curcuma longa) is from the same family as ginger (Zingiber officinale). Both are tropical plants that originated from India and the roots of both plants are harvested for both culinary and medicinal purposes. India remains the largest producer of turmeric in the entire world.

Turmeric contains compounds that are medicinal, and the people of India are constantly being proven correct about the healing powers they’ve known of for a long time. These medicinal compounds are called curcuminoids, the most important of which is curcumin. Curcumin is the main active ingredient in turmeric. Even though it has powerful anti-inflammatory effects and is a very strong antioxidant, the curcumin content of turmeric is not that high. Turmeric generally contains only 3% curcumin.

*Note: Most of the studies on this medicinal herb are using turmeric extracts that contain mostly curcumin itself, with dosages usually exceeding 1 gram per day. Because of this, please keep in mind that it would be very difficult to reach these levels by solely using turmeric powder to spice up your foods. Therefore, if you want to experience the full effects, you need to take a supplement that contains significant amounts of curcumin (such as this one) complete with piperine to help with absorption.

Unfortunately, curcumin is also poorly absorbed into the bloodstream. It can help to consume black pepper with it, though. Black pepper contains piperine, a natural substance that enhances the absorption of curcumin by 2,000%.  Curcumin is also a fat-soluble nutrient, so it is beneficial to take it with a meal heavier on the fats.

Turmeric, or curcumin, will aid the human body in these 3 powerful ways:

Curcumin is a powerful anti-inflammatory. Inflammation occurs when your body fights off an infection of bacteria or viruses and then again when the body repairs the damages done by those pesky foreign invaders (such as the common cold.) Although acute, short-term inflammation is beneficial, it can become a major problem when it becomes chronic and inappropriately attacks your body’s own tissues. Scientists are now beginning to discover that chronic, low-level inflammation plays a major role in almost every chronic Western disease. This includes heart disease, cancer, metabolic syndrome, Alzheimer’s, and various degenerative conditions. Anything that can naturally help fight chronic inflammation without the side effects of drugs could be beneficial and because curcumin is such a strong anti-inflammatory, it could be used effectively to fight chronic inflammation. In fact, it’s so powerful that it matches the effectiveness of some anti-inflammatory drugs, without any of the side effects. Curcumin is a bioactive substance that fights inflammation at the molecular level. It blocks NF-kB, a molecule that travels into the nuclei of your cells and turns on the genes related to inflammation. NF-kB is believed to play a major role in many chronic diseases.

Curcumin has been linked to improved brain function and a lower risk of brain diseases. Scientists used to believe that after childhood, brain cells (called neurons) could not multiply and divide anymore. However, now, scientists have seen this happen! Neurons are capable of forming new connections, but in certain areas of the brain they can also multiply and increase in number. One of the main drivers of this process is the brain-derived neurotrophic factor (BDNF), which is a type of growth hormone that functions in your brain. Many common brain disorders have been linked to decreased levels of this hormone, including depression and Alzheimer’s disease. Curcumin can actually increase brain levels of BDNF and by doing so, it may be effective in delaying or even reversing many brain diseases and age-related decreases in brain function. It can also help with memory although scientists admit more studies are needed on this particular benefit of curcumin.

Curcumin has been studied as a beneficial herbal medicine in cancer treatment and has been found to affect cancer growth, development, and its spread at the molecular level. Several studies have shown that curcumin can contribute to the death of cancerous cells and reduce angiogenesis (growth of new blood vessels in tumors) and metastasis (the spread of cancer). But the even better news is that there is evidence that curcumin may prevent cancer from occurring in the first place, specifically, cancers of the digestive system like colorectal cancer. In a 30-day study of 44 men with lesions in the colon that sometimes turn cancerous, 4 grams of curcumin per day reduced the number of lesions by 40%. Scientists say that more studies are needed on the effects of turmeric on cancer, but the initial results look very promising. Whether high-dose curcumin, preferably with an absorption enhancer like piperine, can help treat cancer in humans has yet to be studied properly.

While several studies have shown the beneficial aspects of curcumin, it still isn’t a supplement many in the West consider a part of their daily lives. It’s a potent anti-inflammatory and antioxidant and may also help improve symptoms of depression and arthritis. It also may help improve brain function while decreasing the risk of brain diseases. Curcumin has also been shown to have a positive effect on cancer cells, often inhibiting their growth. Even though more studies are needed, why not taste it? Toss some spice in your dinner tonight or try a turmeric tea!

*This article is for information purposes only. It is not meant to diagnose, treat, or cure any disease or ailment.  Please speak to a qualified medical professional before taking any supplement.