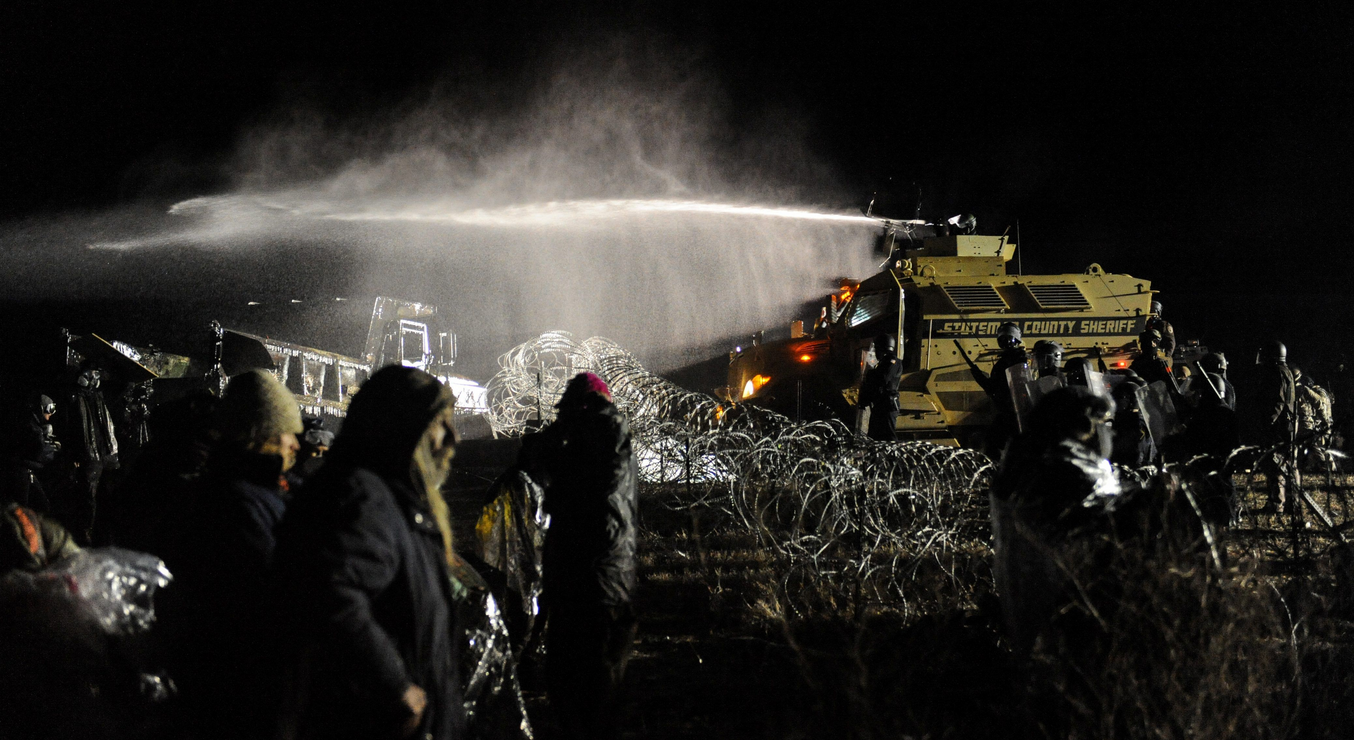 The stand at Standing Rock has reached a critical point.

State officials have ordered the protesters to vacate U.S. Army Corp of Engineer’s land, but there is no sense that anyone is prepared to leave.

Instead, some 2,000 veterans are headed into the camp to act as a human shield against any further attempts to remove water protectors or inflict violence upon them.

Thousands of U.S. veterans will descend this weekend on the site in North Dakota where Native Americans have been protesting the construction of a pipeline that would threaten water and their land.

Some 2,000 veterans will join demonstrations against the Dakota Access Pipeline with the idea of giving a break to protesters who have engaged in the standoff for months. The veterans also want to call attention to the violent treatment that law enforcement has waged on the protesters, according to Veterans Stand for Standing Rock.

“We want to offer them a moment of peace and, if we can, take a little bit of pressure off,” said Ashleigh Jennifer Parker, a Coast Guard veteran and spokeswoman for Veterans Stand for Standing Rock.

Meanwhile, authorities have been threatening to impose a $1,000 fine on individuals who remain in the area; officials have asked stores to stop selling heating fuel and other supplies to protesters.

Many of them are now initiating legal action, as this standoff escalates to a whole new level.

“The Morton County Sheriff’s office not only violates the constitutional rights of peaceful protesters, but their actions highlight the long history of abuse against Indigenous peoples,” said Water Protector Legal Collective (WPLC) attorney Brandy Toelupe. “From the beginning, governments have used their latest technologies to take land and resources from Native nations and oppress Indigenous peoples. Sheriff [Kyle] Kirchmeier’s actions make it clear that nothing has changed.”

An initiative of the National Lawyer’s Guild called the WPLC filed the class-action suit “seek[ing] an immediate injunction preventing [use of] impact munitions such as rubber bullets and lead-filled ‘beanbags,’ water cannons and hoses, explosive teargas grenades and other chemical agents against protesters.”

These heavily and unnecessarily militarized officers — instead of responding to concerns ambulances have difficulties accessing and leaving the Standing Rock Sioux Reservation — unleashed the furious assault against the crowd as night fell. That offensive by police lasted for over six hours — unrelenting in scope and force — leaving hundreds injured, a few severely.

After months of protesting, the situation is now at its most crucial. Will civil disobedience prevail?

It is a potentially pivotal American moment, as many different strands of society are interweaving to take up this issue.

The presence of U.S. military veterans will increase the physical defenses of the water protectors, and will also add a sense of legitimacy and cross-cultural support to the issues they are standing for.

Two-thousand veterans have signed up and the Oceti Sakowin protesters’ campsite cannot hold more veterans than that, but about 1,000 more have said they plan to come, Parker said. The veterans plan to set up on Dec. 4 and will stay at least through Dec. 7, she said. She later added that some would remain indefinitely at Standing Rock.

“The militarized police paid for by tax dollars … is unconstitutional,” Parker said.

“People are being brutalized; concussion grenades are being thrown into crowds,” Parker said. “They’re spraying people, even old women, and other elders of the tribe with tear gas and pepper spray and all of this is just unconstitutional. I can’t believe the media hasn’t taken more of an interest in this.”

The Dakota Pipeline protest has left-leaning flavor and appeal, and it should be a politically-correct win for Obama to use his rightful power to stop the assault against the protesters. But the water protectors also have the populist flavor and appeal that was being sold during the Malheur occupation, and the power of ideological holdouts taking a stand on territorial disputes is too potent a force for the feds to handle. Played the wrong way, it could once again teach the public that they have power to resist against the tyranny that is being imposed upon them, issue by issue at the local level.

That’s where Obama is showing his true stripes. He is being called upon by the left to take a stand for a cause that is partially environmental, and could legitimately taint a huge portion of the nation’s drinking water. But it is unlikely that Obama would take a stand, because it would betray his private loyalties. Instead, Obama will most likely remain silent and aloof, tacitly backing the corporate interests who brought him into power while literally hundreds of protesters are being attacked by law enforcement and other officials.

Here’s the case, which commenter Zeus brought to the fore, as Counterpunch reported:

What many do not realize is that the Dakota Access, a subsidiary of Energy Transfer Partners LLP, originally routed this pipeline near Bismarck but authorities worried that an oil spill would wreck the state capital’s drinking water, so the crossing was moved to a half mile from the reservation across land taken from the tribe in 1958 without their consent. If the tribe had been consulted, the government would have learned that this route requires digging up sacred places, old burial grounds and Lake Oahe, but the Army Corps of Engineers approved this path under a “fast track” option called Permit 12.

Why is this a safety concern? According to the Pipeline and Hazardous Materials Safety Administration, since 1995, more than 2,000 significant accidents involving oil and petroleum pipelines have occurred. From 2013 to 2015, an average of 121 accidents happened every year. Pipelines are approved by states, but access via waterways and federal lands must be approved by the Army Corps of Engineers. On September 9, 2016, the Departments of Justice, the Army and the Interior stated they would not authorize the building of the pipeline near the tribal lands and asked the pipeline company to voluntarily pause all construction activity within 20 miles east or west of Lake Oahe. The company has not followed this directive. Only a few days later, Energy Transfer Partners LLP sent contractors back to work near Standing Rock, where over 20 protestors who discovered this were arrested. President Obama can not only order the work to stop, but he can also deploy the Army Corps of Engineers, or even the National Guard, to stop the violence being perpetrated by local, regional and state officials against the nonviolent protestors.

There are some outrageous power dynamics at work here, and clearly there is good reason to object to the looming contamination of safe drinking water for the general population.

As Claire Bernish notes, this is not happening:

President Obama, the Justice Department, and Washington officials have been silent on the abuses occurring in Standing Rock — and Senator Cory Booker only recently officially demanded the DOJ monitor the situation and launch a civil rights investigation.

“The civil rights violations that night were deliberate and punitive,” WPLC attorney Rachel Lederman asserted. “The Morton County Sheriff’s Department’s illegal use of force against the Water Protectors has been escalating. It is only a matter of luck that no one has been killed. This must stop.”

The leftists in power in the U.S. government have done nothing to protect their civil rights, and have not given any attention to the Standing Rock situation, which is grounded in local and grassroots groups, as President Obama and others have for Black Lives Matter and other underwritten divide and conquer astroturf movements.

Going Off Grid? Here’s What To Do About Water: “Solution With Minimal Effort”