13 Year Old Girl’s Rousing Speech: “If Donald Trump Had A Brick For Every Lie Hillary Has Told He Could Build TWO Walls” 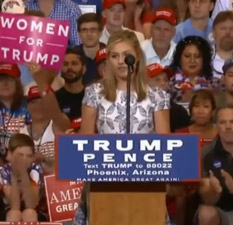 Who can argue with this young lady’s speech?

I bet if Donald Trump had a brick for every lie Hillary has told he could build two walls.

As a thirteen year old even I know Hillary Clinton is working for her own success and ways to control my life, my family’s life and your lives… She wants to make it Hillary’s America… not The Peoples’ America.