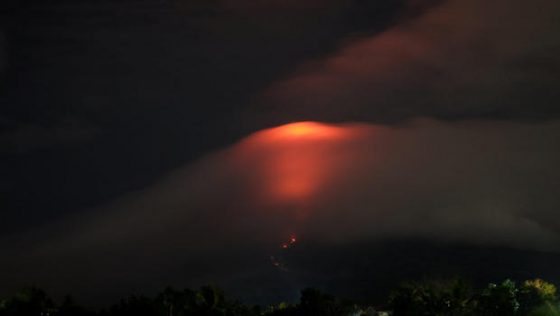 The Philippines’ most active volcano has awoken again. On Sunday, lava pooled to the surface of the volcano’s crater showing a glowing red hot core just below.

By Monday, the crater of a rumbling Philippine volcano was glowing bright red. Coupled with vulcanologists’ warnings it could erupt within days, the glowing crater caused thousands of residents to flee from their homes in search of safety. The volcano lies in the coconut-growing Albay province about 210 miles southeast of Manila.

More than 12,000 people have been ordered to leave a four mile (seven-kilometer) evacuation zone as scientists fear the eruption of the Mayon volcano, and there are warnings of destructive mudflows and toxic clouds. Volcanic earthquakes and rockfalls have also violently shaken the summit of Mayon over the last 24 hours, after a number of steam-driven eruptions, scientists said. Lava flowed just less than half a mile down a gulley from the crater and on Monday morning, ash clouds appeared mid-slope, said Renato Solidum, head of the volcano institute.

“It is dangerous for families to stay in that radius and inhale ash,” Claudio Yucot, head of the region’s office of civil defense, told AFP. “Because of continuous rains in past weeks, debris deposited in the slopes of Mayon could lead to lahar flows. If rain does not stop it could be hazardous.”

Three steam-explosions since Saturday have spewed ash into nearby villages and may have breached solidified lava at the crater and caused lava to start flowing, Solidum said. With its near-perfect cone, Mayon is popular with climbers and tourists but has erupted about 50 times in the last 500 years, sometimes violently.

Experts are concerned about a major eruption which could trigger pyroclastic flows (superheated gas and volcanic debris that race down the slopes of volcanoes at high speeds) that would be capable of incinerating or vaporizing everything in their path. More extensive explosions of ash could drift toward nearby towns and cities, including Legazpi city, the provincial capital, about 9 miles away.